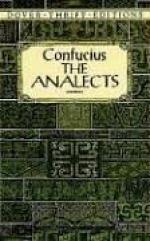 Confucius
This Study Guide consists of approximately 16 pages of chapter summaries, quotes, character analysis, themes, and more - everything you need to sharpen your knowledge of The Analects.

The Analects Summary & Study Guide includes comprehensive information and analysis to help you understand the book. This study guide contains the following sections:

This detailed literature summary also contains Topics for Discussion on The Analects by Confucius.

Confucius is the author of the Analects. He is very important in the Chinese tradition. However, little that is certain is known about the Master . He lived from 552 B.C. to 479 B.C. but his biography is not completed until the first century. By then many legends that cannot be confirmed surround him. Reliability of available sources depends on gleanings from the biography, Shih chi, the Lun yu, which is titled in English The Analects, a commentary—the Tso chuan and The Mencius as supplements. Confucius is the Western name of K'ung Ch'iu also known as K'ung Chung-ni. He is born poor in Lu about 552 B.C. and is orphaned but likes to learn. As an adult he becomes police commissioner of his birthplace. He leaves Lu in 497 B.C. to travel for thirteen years. Confucius returns in 484 B.C. when he is sixty-eight years old. While traveling, he visits other states in ancient China where he offers unheeded advice to feudal lords. Confucius does not succeed in getting his ideas put into practice, so he devotes the rest of his life to teaching. He died in 479 B.C.

The Analects is a 249 page, non-fiction quasi-historical work divided into twenty-four parts that include an introduction, twenty books and three appendices plus back matter and glossary. The Introduction is fifty pages in length; the Books are titled with Roman numerals and range in length from three to seven pages. The Appendices range in length from thirteen to thirty-four pages. Back matter includes notes and cited references pages plus a thirteen-page Glossary. The Introduction and Appendices are written in regular prose form that is invaluable to an understanding of Confucius' thinking. The Analects is compiled from ancient scripture, legends and traditions. Introduction and Appendices integrate themes, ideas and interpretations from many sources. They provide a road map to understanding the life, times and thought of Confucius, the founder of Confucianism.

The Analects are not written in prose but rather in a poetic verse-like form. This version is one of three discovered and is comprised of twenty books. The titles, Book I through Book XX may be intimidating until the term book is understood to be more like a chapter. Each book has numbered sections called Chapters that are more like verses. The Analects itself totals about one hundred pages. Reading comprehension is enhanced by explanations in the Introduction and Appendices. The Analects is a study in ancient Chinese culture and characters. The work is based on a complex and nuanced language that needs clarification for comprehension. Its poetic form and veiled Chinese nuance adds to the difficulty a casual reader may have in understanding the apparently disjointed, but clearly significant subject matter. Confucius is the father of the Chinese schools of Confucianism in their many forms. The Analects is not written by Confucius in a conventional Western sense of an author. It is compiled from Chinese archaeological source documents and ancient, edited translations researched and gathered together into an articulate work published by D.C. Lau in 1979.

More summaries and resources for teaching or studying The Analects.

The Analects from BookRags. (c)2022 BookRags, Inc. All rights reserved.