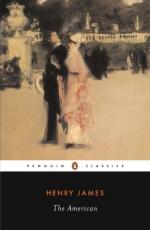 The American Summary & Study Guide includes comprehensive information and analysis to help you understand the book. This study guide contains the following sections:

This detailed literature summary also contains Topics for Discussion and a Free Quiz on The American by Henry James.

In the novel The American by Henry James, American Christopher Newman learns firsthand how cruel a society can be when one's worth is based on name and lineage rather than an individual's characteristics. In Newman's case, he is denied the right to marry the lady of his choice because she is an aristocrat and he is not of royal bloodlines. The novel illustrates the great differences in the French and American cultures in the mid-nineteenth century.

At the beginning of the novel, Newman is attempting to enjoy his leisure in The Louvre in Paris. Although he knows little French, Newman approaches a young lady, Mademoiselle Noemie Nioche, copying a painting in the museum and offers to buy her work from her. Although she quotes him an exorbitant charge, Newman agrees to buy the painting. In exchange, Noemie's father agrees also to give Newman lessons in French conversation. As Newman becomes more acquainted with Noemie and her father, he adopts them as his own project. He offers to help the girl get married by buying a number of paintings from her for an amount of money that will serve as her dowry. Although Noemie does not reject the proposal, she never begins the work.

Meanwhile, Newman has met up with an old friend from America, Tom Tristam. Tristam's wife has introduced Newman to the beautiful Claire de Cintre. Although Claire does not wish to remarry, she does finally agree to marry Newman. Because Newman is of the working class, Claire's family does not like him. They do agree to allow Claire and Newman to marry only because they are aware that Newman has a great deal of money. As the engagement progresses, however, Claire's mother and older brother decide they cannot stand to see Claire married to a "commercial" person, as they call Newman. In reality, a distant, rich relative has suddenly arrived whom they would prefer that Claire marry. Instead of being forced to marry this relative, however, Claire joins a convent and refuses to speak to Newman or her family again.

Despite his bad experience with the Bellegardes, Newman does feel that he has one opportunity to redeem himself. On his deathbed, Claire's brother, Valentin, tells Newman of a secret in the Bellegarde family. Newman searches out information about this secret and not only finds someone who can validate the fact that Claire's mother and older brother were responsible for the death of Claire's father, but also has tangible proof of the murder.

For a while, Newman entertains himself with the idea that the Bellegardes are afraid of him because he has discovered their secret. Newman approaches Urbain with a copy of the note and threatens to make the secret public if Urbain does not allow his sister to marry. Even with his secret out, Urbain will still not agree to the marriage. Newman considers telling the Bellegardes' secret, but his good nature gets the best of him and he finds he does not see the sense in doing anything that might be harmful to the family. At the conclusion of the novel, however, it is suggested to Newman that he did not state his position strongly enough to get the attention of the Bellegardes and make them understand that he meant business. At this point, Newman has already dropped the note into the fireplace and it is too late to retrieve it.