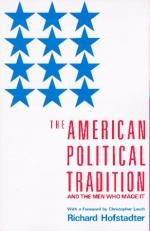 Plot Summary
+Chapters Summary and Analysis
Chapter 1, The Founding Fathers: An Age of Realism
Chapter 2, Thomas Jefferson: the Aristocrat as Democrat
Chapter 3, Andrew Jackson and the Rise of Liberal Capitalism
Chapter 4, John C. Calhoun: The Marx of the Master Class
Chapter 5, Abraham Lincoln and the Self-Made Myth
Chapter 6, Wendell Phillips: the Patrician as Agitator
Chapter 7, The Spoilsmen: An Age of Cynicism
Chapter 8, William Jennings Bryan: The Democrat as Revivalist
Chapter 9, Theodore Roosevelt: The Conservative as Progressive
Chapter 10, Woodrow Wilson: The Conservative as Liberal
Chapter 11, Herbert Hoover and the Crisis of American Individualism
Chapter 12, Franklin D. Roosevelt: The Patrician as Opportunist
Free Quiz
Characters
Objects/Places
Themes
Style
Quotes
Topics for Discussion
Order our The American Political Tradition and the Men Who Made It Study Guide

Richard Hofstadter
This Study Guide consists of approximately 29 pages of chapter summaries, quotes, character analysis, themes, and more - everything you need to sharpen your knowledge of The American Political Tradition and the Men Who Made It.

The American Political Tradition and the Men Who Made It Summary & Study Guide includes comprehensive information and analysis to help you understand the book. This study guide contains the following sections:

This detailed literature summary also contains Topics for Discussion and a Free Quiz on The American Political Tradition and the Men Who Made It by Richard Hofstadter.

The American Political Tradition and The Men Who Made It is the story of the major social and political figures in American history that shaped the institutions and practices of the United States. It was written by one of the most important American historians in the twentieth century, Richard Hofstadter. The book covers the period of American history ranging from the American Revolution to the end of World War II. It has twelve chapters, each of which focuses on a single great man, or, less frequently, a small group of minor characters. It is the purpose of the book to focus on character portraits, to illustrate the history, ideas, temperament and principles of the 'great figures' of American political history and the way in which their actions and thought affected the United States history.

Several themes pervade the book. First, Hofstadter focuses on these differing figures' contrasting views on the relationship between government and the economy. Earlier figures sought to preserve economic liberty from the state and big business, while later figures tended to prefer a larger government, and believed in restricting economic liberty for the sake of the poor and the control of big business interests. Another constant theme of the book is the differing and evolving concepts of democratic life particular to each period. The American Founders were hostile to democracy, whereas Jefferson and Jackson strongly supported it. Calhoun opposed it and Lincoln defended it. A final theme of the book is Hofstadter's penchant for painting realistic and balanced pictures of the major characters in American politics. He argues that Lincoln was largely indifferent to slavery, that Theodore Roosevelt never met a war he didn't like and that FDR was a political opportunist with few political principles. Overall, the book presents a coherent story about the evolution of American political and economic institutions along side a narrative about the most important figures in American history. Hofstadter combines an analysis of ideas with a psychological analysis of those who implemented them.

More summaries and resources for teaching or studying The American Political Tradition and the Men Who Made It.

The American Political Tradition and the Men Who Made It from BookRags. (c)2022 BookRags, Inc. All rights reserved.