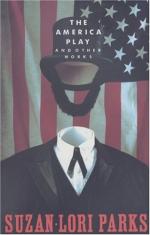 The America Play, and Other Works Summary & Study Guide

Suzan-Lori Parks
This Study Guide consists of approximately 42 pages of chapter summaries, quotes, character analysis, themes, and more - everything you need to sharpen your knowledge of The America Play, and Other Works.

The America Play, and Other Works Summary & Study Guide Description

The America Play, and Other Works Summary & Study Guide includes comprehensive information and analysis to help you understand the book. This study guide contains the following sections:

This detailed literature summary also contains Topics for Discussion and a Free Quiz on The America Play, and Other Works by Suzan-Lori Parks.

This collection of plays and essays, by innovative playwright Suzan-Lori Parks, explores issues fundamentally tied to the experience of being an African American. As she experiments with language and structure in a series of metaphor-rich theatrical narratives, she explores issues relating to individual and racial identity and the necessity to transcend both internalized and external forms of oppression.

The collection begins with a series of three short essays written by the author and introducing her primary thematic and narrative concerns - the idea of owning (possessing) identity, the value of finding an individual creative voice during the process of creating theatre, and the dangers of living within the essentially white-defined experience of being African American.

The first play in the collection is, in fact, a series of short plays themselves collected under the title of "Imperceptible Mutabilities in the Third Kingdom." In the first play, "Snails," a group of friends/roommates struggle to define their place in the world while being observed and commented upon by a scientist. Next, two parts of a play called "Third Kingdom," in which a group of characters look towards a future where their identities are clear and freely self-defined, bracket another play, this one called "Open House." An older African American woman first takes care of, and then is rejected by, a pair of young people eventually driven to leave all the unsavory aspects of their past behind. The fourth and final part of this series is "Greeks, or The Slugs" in which an African American military officer and his socially ambitious wife struggle not only to advance their status, but in fact simply maintain it.

"Imperceptible Mutabilities" is followed by two short plays. The first, "Betting on the Dust Commander," dramatizes the near-abusive relationship between gambler Lucius and his long suffering wife Mare, who is desperate for independence. The emotional and personal patterns in which the two characters are locked are also evoked by the play's structure, in which the characters play out the same scene twice, with only minor variations in content and form. The next play in the collection is "Pickling," a monologue for a character named Miss Miss, whose memories of an attractive man named Charles seem inextricably tied to her memories of life in her mother's kitchen—specifically her pickled beets.

"The Death of the Last Black Man in the Whole Entire World" is next, its title and situation based on one of the author's dreams according to the essays at the beginning of the collection. Characters with names representing both the oppressive and the positive aspects of African American history—admittedly more of the negative aspects than the positive—recall and dramatize an incident related to the lynching of a particular black man.

The final play in the collection is "The America Play," arguably the best known play in the collection. Its action and thematic considerations center around the experience of a character called "The Foundling Father," who made his living impersonating Abraham Lincoln, even to the point of recreating the shooting that took Lincoln's life. The first act explores The Foundling Father's history and experience, while the second act explores the attitudes and relationships of his ex-wife and son to both his experiences and that of Lincoln himself.

More summaries and resources for teaching or studying The America Play, and Other Works.

The America Play, and Other Works from BookRags. (c)2022 BookRags, Inc. All rights reserved.