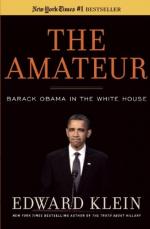 The Amateur Summary & Study Guide includes comprehensive information and analysis to help you understand the book. This study guide contains the following sections:

This detailed literature summary also contains Topics for Discussion on The Amateur by Richard Harding Davis.

"The Amateur" is a 2012 book written by Ed Klein, former editor-in-chief of the New York Times Magazine. The book is an extended attempt to analyze and criticize the character of American President Barack Hussein Obama and his advisers. The general thesis of the book is that Barack Obama is an "amateur," someone who was uniquely unprepared for the presidency when he was elected and who has not learned from his mistakes over time. This "expose" also paints Obama as introverted, easily provoked and arrogant person with delusions of grandeur. Further, he is backed by a series of personally unsavory characters that reinforce his poor character and decisions, including but not limited to his wife, Michelle Obama, and advisers Valerie Jarrett, Samantha Power, Rahm Emmanuel and David Axelrod.

The book, following its introduction and prologue, proceeds in five parts with twenty-two relatively brief chapters. Part I, "Chicago, That Toddlin' Town" contains chapters 1-5 and tells the story of Obama's rise to the presidency, unsavory personal and political details on full display. Klein argues that Obama was indifferent to those who helped him rise to power and threw them under the bus when it proved convenient for him. These chapters include interesting testimony from a number of figures, including Obama's controversial former pastor, Jeremiah Wright.

Part II, "Amateur Hour at the White House," includes Chapters 6-12. It focuses on the early years of the Obama presidency, showing how many members of the media and "liberal elites" drank the "Obama Kool-Aid" and so overlooked his initial bungling of the job. In this part, Klein also develops biting critiques of Valerie Jarrett and Michelle Obama, not only in their political roles but their personalities as well.

Part III, "With Friends Like These," including Chapters 13-16, and focuses on arguing that Obama betrayed and alienated many of those who had supported his candidacy. Perhaps the most sordid of these stories is the Obamas' relationship with Oprah Winfrey, who arguable earned Obama a million additional votes by endorsing him. But Obama also snubbed the Kennedy family and American Jews.

Part IV, "The Obama Doctrine" criticizes Obama's foreign policy, especially the baleful influence of Samantha Power and his mistreatment of military officials such as General Jones. This part contains Chapters 17-19. Part V, "A One-Term Proposition?" shows that both the "Old Obama" of the 2008 campaign and the "New Obama" of the 2012 campaign are both fraudulent. Klein concludes that Obama does not deserve a second-term.

Readers should be prepared for a highly politicized work of a right-of-center author. Klein has far more criticism than praise for Obama and makes a concerted effort to paint him in a negative light. Further, the entire book is not focused on demonstrating that Obama is an "amateur." Rather, it is a wide-ranging criticism of Obama's character and those actions and character of his closest advisers.