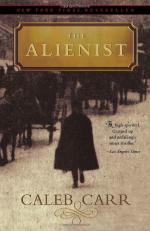 The Alienist Summary & Study Guide includes comprehensive information and analysis to help you understand the book. This study guide contains the following sections:

This detailed literature summary also contains Topics for Discussion and a Free Quiz on The Alienist by Caleb Carr.

The Alienist is the first foray into fiction by military and diplomatic historian Caleb Carr. This novel is set in 1896 at the advent of the psychological investigator. Dr. Kreizler is a psychologist who is often shunned by colleagues and polite society due to his unique views regarding the mentally ill. However, it is Kreizler Theodore Roosevelt, the police commissioner, turns to when a serial killer begins targeting New York's poor, immigrant children. With the help of his good friend, reporter John Schuyler Moore, a police secretary, and a pair of police detectives, Kreizler will use a psychological profile to track and catch the killer. The Alienist is a psychological thriller with a mix of true history that leaves the reader not only entertained, but fascinated by the rich detail drawn from reality.

John Schuyler Moore is awakened in the middle of the night by Stevie, a servant to his good friend Dr. Lazlo Kreizler. Stevie has been instructed to take Moore to the sight of a recent murder. Moore is shocked by what he sees and confused as to why he, a reporter, was called to the scene. The following day, during a meeting with Kreizler and police commissioner, Theordore Roosevelt, Moore learns that Kreizler believes this murder is the third in a series of murders against immigrant children working as prostitutes. Kreizler wants to use his background in psychology to track the killer and he wants to do it with Moore's help.

Aware that the public and his co-workers would not approve of Kreizler's involvement in the case, Roosevelt agrees to allow Kreizler to work the case only if he agrees to do it away from police headquarters and out of sight of the public. Kreizler asks only for a pair of detectives and a liaison between himself and police headquarters. With this agreed, Moore and Kreizler begin work on the investigation beginning with an interview with a recently arrested child killer.

The pair of detectives Roosevelt has chosen to work with Kreizler is a set of brothers Lucius and Marcus Isaacson who have a background in forensics and medicine. Sara Howard, one of the first female employees of the New York police department, also joins the team as liaison between Kreizler and Roosevelt. The investigation begins with the team studying various psychology books Kreizler has provided. The team uses this knowledge to begin working a picture of the killer based on his actions. Kreizler believes that if they can build a strong profile of the killer, they will be able to predict his next move and eventually discover his identity. At the same time, the investigators begin visiting the houses where the victims had worked in order to learn more about their lives and their final moments. As the team investigates, they become aware that someone is following them and does not want them to complete the investigation. Moore, who has learned that a couple of thugs have been visiting victim's families with a priest and an Episcopal priest, decides to talk to the Bishops of these churches to learn their involvement. However, Moore is stonewalled and learns nothing of use.

Eventually the team builds a strong psychological profile and begins writing letters to mental institutions working on the assumption the killer was once confined to such an institute. A letter from Washington, DC leads to a visit there. The team comes across a report of a murder in a New York farm town that fits their killer's modus operandi. The murder was blamed on Indians, but this excuse makes little sense to the investigators. Moore and Kreizler visit the surviving brother of these murders who describes a horrific childhood and abuse against his little brother that fits perfectly with Kreizler's profile of the killer. This gives the team a name and way to track the killer.

Moore takes over the case when Kreizler backs off due to the death of his fiancée by local thugs who do not want the murders solved. Moore leads the team in tracking the killer's movements over the last six months and searching his apartment. The latter of these acts leads to a possible location of the next murder. The team sets up a surveillance of the possible location while Moore finds himself blackmailed into attending the opera with Kreizler. However, this turns out to be a ruse to keep the thugs off their backs as Kreizler takes Moore to the true site of the next murder. Kreizler and Moore confront the killer, managing to take him into their custody. However, they are once again interrupted by the thugs, one of whom manages to kill the suspect. Disappointed, Kreizler quickly arranges an autopsy of the body in an attempt to learn if there is something physically wrong with him that caused him to be a killer. Unfortunately, this is not the case and no one will know for sure why he became a killer.

The Alienist from BookRags. (c)2022 BookRags, Inc. All rights reserved.