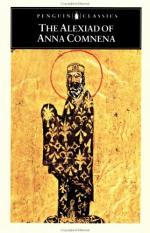 Anna Komnene
This Study Guide consists of approximately 28 pages of chapter summaries, quotes, character analysis, themes, and more - everything you need to sharpen your knowledge of The Alexiad of Anna Comnena.

The Alexiad of Anna Comnena Summary & Study Guide includes comprehensive information and analysis to help you understand the book. This study guide contains the following sections:

This detailed literature summary also contains Topics for Discussion and a Free Quiz on The Alexiad of Anna Comnena by Anna Komnene.

The Alexiad is a history of the ruler of Byzantine Emperor Alexius I Comnena who presided over what is often referred to as the Comnenian Restoration in the late 11th and early 12th centuries. The Byzantine Empire, the descendant of the Eastern Roman Empire, was ruled by the Emperor from Constantinople. The Alexiad is written by the daughter of Alexius, Anna Comnena who writes a history of her father's deeds, stridently and frequently maintaining that she can give an impartial record despite the fact that her father is the main character.

The book is composed of a preface of fifteen minor books. There is no one plot, but many, so listing the main events in each book is appropriate. In the preface, Anna introduces herself and explains her rationale for writing the book. She defends her ability to be impartial. Book I explains how Alexius became general under the Emperor and explains the preparations for the Norman Invasion. Book II covers the revolt of Isaac and Alexius Comnena against the Emperor and Alexius's rise to power. Book III records problems with the Ducas family, Alexius's marriage to Irene, repenting for his war crimes and making preparations for war and alliances. The Normans are coming at him from the West and the Turks from the East and South.

Book IV begins the tale of the war against the Normans. It begins with Robert Guisard of the Normans attacking Dyrachium and Alexius barely escaping with his life. Book V details Alexius's financial struggles due to the war, Bohemund's fight against Alexius, Alexius's victory and his persecution of the heretic John Italus. Book VI brings the War against Normans to an end. Alexius makes progress against the Turks, persecutes Manicheans, Robert Guiscard dies, and the Scythians prepare for war.

Book VII tells the story of the War Against Scythians and Book VIII brings it to an end. Book IX covers Alexius's skirmishes and battles with the pirate Tzachas and the Dalmatians. Book X sees the quashing of more heretics, a war against Cumans and the organization and launching of the First Crusade. Book XI tells the story of the First Crusade, including the conquest of Nicea, Antioch and Jerusalem. Bohemund makes trouble over Antioch but Alexius defeats him.

Book XII covers a series of domestic conflicts, one of which Queen Irene gets caught in. He stops Anemades's conspiracy against him and watches as the Normans prepare for their second invasion. In Book XIII, Anna explains the quashing of Aaron's conspiracy and Alexius's defense against the second Normand Invasion which ends with the Treaty of Devol, which ended the fight between Bohemund and Alexius.

Book XIV shows the rise of Turkish forces and continuing problems with the Franks. Alexius develops some health problems and uproots Manichean heretics. In Book XV, Alexius embarks on his last expeditions, crushes the Bogomil heretics and burns their leader Basil alive. He makes peace with the Turks and builds an orphanage. The book ends with Alexius's last illness and death.

More summaries and resources for teaching or studying The Alexiad of Anna Comnena.

The Alexiad of Anna Comnena from BookRags. (c)2022 BookRags, Inc. All rights reserved.