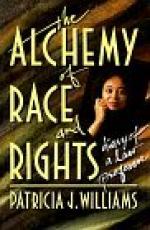 The Alchemy of Race and Rights Summary & Study Guide

Patricia J. Williams
This Study Guide consists of approximately 28 pages of chapter summaries, quotes, character analysis, themes, and more - everything you need to sharpen your knowledge of The Alchemy of Race and Rights.

The Alchemy of Race and Rights Summary & Study Guide Description

The Alchemy of Race and Rights Summary & Study Guide includes comprehensive information and analysis to help you understand the book. This study guide contains the following sections:

This detailed literature summary also contains Topics for Discussion and a Free Quiz on The Alchemy of Race and Rights by Patricia J. Williams.

The Alchemy of Race and Rights concerns the relationship between race, critical legal theory, and the idea of legal and human rights. Patricia Williams, a black professor of law currently at Columbia University, is a member of the critical legal studies movement, which began in the 1970s.

The critical legal school tends to affirm several common thesis, such as that law is indeterminate and so judges end up making decisions based on their personal and social biases. If all law is politics and that every legal decision is a political decision, then there is no real distinction between the judicial and legislative. Both forms of activity construct a "social space," that the law more often than not serves the interests of those with power because it protects them from responding to the demands of the week. Finally, critical legal studies maintains that the legal order is based around a series of hard and fast distinctions that in reality are contradictory and trap individuals who do not fit in those categories.

Patricia Williams, while a member of the critical legal studies movement who teaches this philosophy of law to her students (sometimes against their vehement protest), uses the Alchemy of Race and Rights to criticize the school. While much of the book defends the main theses of critical legal theory, particularly through the lens of the oppression of blacks and women, Williams argues that rights for black Americans are an important part of the law. Critical legal studies tends to view "rights" as legal fictions that only protect rich whites and that real law should encourage social and informal decision-making and dispute resolution.

However, Williams claims that her experience as a black woman has shown her that whites will not sit down at the table with blacks to produce a real and living equality unless they are forced to recognize the claims of blacks. Rights are a rhetorical, spiritual, and social method of getting the attention of the rich and powerful. This is why blacks have pursued rights with such vehemence. The "alchemy" or race and rights uses rights to stop the denigration of the black race and promote their interests.

While the foregoing is Williams's main line of argument, the reader may have trouble discerning it due to Williams's writing style. While The Alchemy is a work of legal philosophy, Williams writes from a very personal and emotional perspective more often than not illustrating her points from her own personal experience. She acknowledges ordinary forms of discrimination in her own life that are quite less brutal than the vicious forms of oppression in the lives of other blacks. Thus, general arguments are harder to discern than they might otherwise be. Further, Williams ardently defends her personal and emotional method on the grounds that to do otherwise would be dishonest to herself and shove herself into the very rigid categories that critical legal theory seeks to undo.

The Alchemy is composed of four parts. Each contains three chapters, though the book itself ebbs and flows between the main line of argument and its illustration. Much of the book focuses on defending the common themes of critical legal theory and elsewhere Williams criticizes it. Her stories and anecdotes throughout the book are meant to illustrate how she wants critical legal theory to develop. This arises in the light of the challenge the experience of American blacks present to it.

More summaries and resources for teaching or studying The Alchemy of Race and Rights.

The Alchemy of Race and Rights from BookRags. (c)2022 BookRags, Inc. All rights reserved.