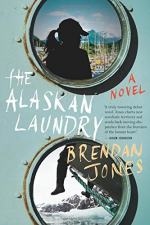 This detailed literature summary also contains Quotes and a Free Quiz on The Alaskan Laundry by Brendan Jones.

NOTE: This guide refers to the Kindle Version of The Alaskan Laundry by Brendan Jones.

In The Alaskan Laundry, a novel by Brendan Jones, Tara Marconi and her father have a terrible fight after her mother's death. Tara flees to her boyfriend Connor's apartment. Though Connor tries to make Tara happy, she wakes up one morning feeling as if she cannot breathe. The sensation spurs her to talk to her cousin about getting her a job in a place he had once worked and told her stories about - an island in Alaska called The Rock. He warns her that life there shows men what they were made of and that there are bears. She still insists that this is where she wants to be. He gets a job for her, and she travels to the island.

During Tara's time on the ferry to the island, she begins to breathe easier. She meets a man who works on the island, and he gives her a preview of what to expect. When she arrives, Fritz, her new boss meets her. Fritz is tough, but he also has a soft spot. Even though Fritz says that Tara is there to work hard, he tells her as soon as they meet that if she wants to turn around and go home, he will understand. She stays. On the first day she is late, and she tries to give Fritz an attitude when he chides her. After her first day, she is never late again. Sometimes, Tara is early.

While working for Frtiz, Tara makes a new friend, Newt. He has his own goal for the island. He wants to bring his girlfriend and her son to The Rock. He will buy a boat and fish for his family. He takes Tara under his wing and helps her get accustomed to her job.

Even though she has her work, Tara feels lonely and writes to her boyfriend, Connor. Around the same time, she becomes interested in a tugboat that she has seen.. She thinks that the tugboat could be an endeavor for her and Connor. However, Connor writes and tells her about how she hurts others because of whatever is causing her own pain.

Newt has already told her that people need a concrete goal in order to get past whatever is holding them back. He calls the goal a channel marker. He urges her to get a job to make more money so that she can buy the tug because it is her channel marker. She holds back, however, until she sees Connor moving forward with his life.

Making more money means leaving her job with Fritz and moving to other jobs - first at a processor and then on boats at sea. Her first boat is the same one that Newt had worked on after his job at the processor. Newt quit working on the boat after losing his eye. When Newt quits, Tara is hired . She is doing well there because she is a hard worker. She leaves, however, after the skipper, a woman named Jackie, makes a pass at her. She gets several other jobs that help her earn enough money to buy the tug. During this period of time, she finds the courage to face the pain of a rape that happened when she was younger. This allows her to build her relationship with Connor. At the same time, she faces the pain of her mother’s death. Facing that pain helps her start rebuilding her relationship with her father.

Once Tara buys the tugboat, she faces the challenge of getting the engine going so that she can move the boat. When the time comes, her new community and Connor come to her aid. They help her get the engine started. The boat sinks the next day, but Tara vows to bring it back to the surface. Tara is no longer lost. She has found her identity, and she goes home with Connor on the anniversary of her mother's death.