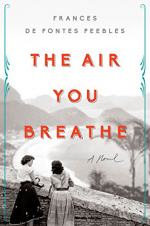 Frances de Pontes Peebles
This Study Guide consists of approximately 66 pages of chapter summaries, quotes, character analysis, themes, and more - everything you need to sharpen your knowledge of The Air You Breathe.

The Air You Breathe Summary & Study Guide includes comprehensive information and analysis to help you understand the book. This study guide contains the following sections:

This detailed literature summary also contains Quotes and a Free Quiz on The Air You Breathe by Frances de Pontes Peebles.

The following version of this book was used to create the guide: de Pontes Peebles, Frances. The Air You Breathe. Riverhead Books, 2018.

The novel begins with 95-year-old Dores reminiscing about Sofia Salvador while listening to her samba music. In Part 1, “The Sweet River,” Dores explains she was given to Nena, the cook of Riacho Doce, to raise in the kitchen. The plantation was owned by the Pimentel family, and when Dores was nine years old, Graça and her family moved into the Great House. Despite the gap in their socioeconomic classes, Dores and Graça became friends. Senhora Pimentel taught the girls English, allowing Dores to be tutored alongside Graça, and brought them to a fado concert in Recife. The concert sparked a passion for music in the girls, who often sang together to records and the radio.

In Part 2, “Escape,” Dores remembers the pain of missing Graça years after her death. She explains that as adolescents, Graça instigated their illicit trips to the cane cutters’ song circles. Graça later rebelled against her parents’ suitors and staged an attempted suicide with Dores. Senhor Pimentel responded by sending Graça to a boarding school run by nuns, and Nena insisted Dores accompany her as her helper. On a school trip to Rio, the girls slipped away and traveled to Lapa. Once there in Part 3, “The Air You Breathe,” the girls sang in front of the radio station for recruitment. They were summoned to Madame Lucifer, who agreed to help them in return for work. The girls became drug mules to pay their debts and received lessons from Anaïs, where Graça chose her stage name, Sofia Salvador. They met Vinicius, their guitar player, at their first show.

Part 4, “We are from Samba,” begins with Dores remembering how Vinicius helped pull her from grief and depression with samba. She remembers the pain of being told she could not be the singer that Graça could in Lapa. After a show, Vinicius invited Dores to his roda, where she met Tiny, Kitchen, Bonito, Banana, and Noel. Eventually, Dores’s lyrics were invited into the roda, and Graça invited herself. Madame Lucifer convinced Dores to work behind the scenes rather than on stage. Dores then convinced Vinicius to allow Sofia Salvador and the Blue Moon Band to record a song for the radio. Later, Dores found solace with Anaïs. In Part 5, “Meant to Be,” Vinicius and Graça initiated a romantic relationship. Sofia Salvador and the Blue Moon Band played at the Mayrink Radio Showcase where the former wore traditional Baiana dress to hide her botched hair dye. Their niche soon became saturated with imitators.

Senhor Pimentel found the girls in Lapa. In Part 6, “Without Regret or Virtue,” Dores remembers bringing Vinicius to the movies to help him remember 1940. She describes her own struggle with Senhor Pimentel that year. He was consistently dissatisfied with what the girls had since accomplished. Graça discovered Vinicius and Dores during one of their secret composing sessions. Graça listened to her father, who booked the group a gig at the Lion’s, a newspaper owner’s, home. Using her connection to the Lion forged at the event, Dores landed Sofia Salvador and the Blue Moon Band a meeting with a Hollywood scout. Knowing Senhor Pimentel would abuse his parental power over the unmarried Graça, Dores asked Madame Lucifer for help. The latter killed Senhor Pimentel in response, which Dores kept from Graça.

In Part 7, “Samba, For a Time You Were Mine,” Vinicius spent time with Graça rather than composing with Dores. Sofia Salvador and the Blue Moon Band were offered a part in a Hollywood film, in part to advance the relationship between the two countries. They traveled to Los Angeles where Tiny, Kitchen, Bonito, and Banana were separated from the others based on their skin color. They began filming the next day, and Sofia Salvador was offered a small speaking part. As time passed in Part 8, “Turned into a Gringa,” Sofia Salvador and the Blue Moon Band were losing popularity in both America and Brazil. They discovered the negative reviews of Brazilian critics in the Lion’s newspaper. Soon Dores and Vinicius began releasing the songs they created in secret as the duo Sal e Pimenta. The group experienced backlash from the crew for their differences. After the group found out about Sal e Pimenta, they used their recording session to record a song together, which would be their last.

Dores remembers when she and Vinicius began composing together again in their old age in Part 9, “Between Us.” After World War II, the group lost more popularity and were offered an advertising job flying back to Rio. Graça agreed on the condition the group play at the Copa. Sal e Pimenta were scheduled to perform then night before Sofia Salvador per Madame Lucifer. The latter performance was a success. Sofia Salvador and the Blue Moon Band were not well received, so Graça unexpectedly performed Sal e Pimenta songs. The audience reacted nearly silently.

Graça was distraught after the performance and argued with Dores, who was angry that Graça used her songs in Part 10, “The End of Me.” Dores left Graça and found solace with Vinicius on the beach. When they returned to her room the next day, they found her dead on the floor in her vomit after her suicide by overdose. Brazil showed an outpouring of love for Sofia Salvador after her death. In the years following, Dores fell into deep depression and addiction, which Vinicius helped her through. She still hears Graça’s voice in her head, and at the end of the novel, Dores strums Vinicius’s guitar and imagines their roda of the past.

More summaries and resources for teaching or studying The Air You Breathe.

The Air You Breathe from BookRags. (c)2022 BookRags, Inc. All rights reserved.