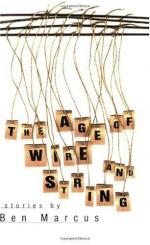 The Age of Wire and String Characters

Ben Marcus
This Study Guide consists of approximately 32 pages of chapter summaries, quotes, character analysis, themes, and more - everything you need to sharpen your knowledge of The Age of Wire and String.

The Age of Wire and String Summary & Study Guide Description

The Age of Wire and String Summary & Study Guide includes comprehensive information and analysis to help you understand the book. This study guide contains the following sections:

This detailed literature summary also contains Topics for Discussion and a Free Quiz on The Age of Wire and String by Ben Marcus.

Jason Marcus, also called Jase, is the author's brother. This fact emerges only gradually and obliquely through the course of the book. It also slowly becomes apparent that something happened to Jason. The initial clue given is that Jason is no longer present. Toward the end of the book, the author states that Jason died, although he gives no information about how or when this happened. Only in the most indirect ways, when the author alludes to guilt or blame concerning the death of family members, is it possible to infer that unhappy conditions at home might have contributed to Jason's death. This is simply a guess on the part of the reader, however, because so much of the language in the book is symbolic and inaccessible on a rational level. Jason seems to have been an ingenious boy, because the author credits him with inventing a method of correlating food parts with people, which apparently was a wonderful achievement. At one point, the author implies that Ben Marcus, rather than Jason Marcus, should have been the son who died, although no clue is given whether this is because Ben feels in some way responsible for Jason's death, or simply feels inadequate compared to Jason. In one scene, the author describes a "roarer" that can be swung to simulate the sound of a dead brother's speech, and the reader learns that the roarer is made of the dead brother's leg. The living brother even tries to allow the dead brother to stand in for him. Toward the end of the book, the narrator admits that Jason was his first love. What happened to Jason is a central, mostly unresolved mystery in the book.

Father, also known as Michael Marcus, is the narrator's father. Sometimes called the patriarchal figure, the father apparently was "constructed" during a time known as the Age of Wire and String, when a particular type of conversation was invented involving wire and string placed over the mouth. Michael seems to be capable of rages, and will hit the family pets. He sometimes goes away in the course of the book, but he usually seems to be near his son, Ben Marcus. Sometimes, the father appears to be a generic figure rather than Michael Marcus, as when the author discusses a method of communing with a dead father in his grave, or "western worship box." The author writes that the term "Michael" also may be used generically, as the name for any man one wishes were the father, or in a system of patriarchal rendering. In this book, which uses a few names but does not create conventional characterizations, the father is probably the most fleshed-out figure, because he is mentioned in different contexts throughout the book, giving the author the opportunity to add more information about him each time. One thing that emerges about the father, and Michael Marcus, is that he holds major symbolic significance for the narrator, but the relationship appears to be one of love-hate, or at least of strongly mixed emotions on the narrator's part.

Mother, also occasionally called "our mother" and referred to one time as "Mrs. Marcus," is usually the narrator's mother, although sometimes the term refers to a generic mother, similar to the case of "father" in the book. The mother, associated with the house, is characterized as warm, soft, and sweet-smelling. At home, people vie to cuddle with her. This characterization seems deliberately cliché and lacking in detail, as if the author's intention is to caricature the mother. Eventually, the reader realizes that the narrator's mother has died, just as Jason did, although no connection is drawn in the text between these two deaths. At one point, the narrator is digging with a shovel and he promises his mother that he will not dig near her, which suggests not only her death, but perhaps also the narrator's unwillingness to probe too deeply into his fond remembrances of his mother.

Ben Marcus is the author and the narrator, as well as a false map, scroll, caul, or parchment, a garment, and the "antiperson." In other words, Ben Marcus is a decidedly elusive and changeable character in this book. At one point, the author describes "The Ben Marcus" as, "a fitful chart in the darkness," which, when properly decoded, indicates only that we should destroy it and look elsewhere for instruction.

Grandfather, also sometimes called Grandover, is the narrator's grandfather. He is mentioned a number of times, but much of these mentions are in passing, and merely identify him as someone in the house during a particular scene in the book. As a character, the grandfather is faceless and almost devoid of personality. Once, the author suggests that the grandfather has some influence over the father in a conversation, but beyond that, the grandfather seems to be nothing more than a benign, occasional presence.

Membersappears in Throughout the book

Members are people, but the author never explains their membership. In his roundabout, stilted style of expression, he refers regularly to members but never identifies the group or groups to which they belong. They could be members of society, of families, or perhaps members of some special organization that has gone unnamed throughout the book. It is quite likely that they are simply members of humanity, or people. Calling them members makes them seem special and a little mysterious, which is certainly true of people.

Thompson is a supreme leader, who might be God or a human being, or perhaps either one, depending on the context. Thompson also seems to be a power or a quality invested within whoever Thompson is. "Perkins" is a related term that is used to describe the body of Thompson, so that the name "Thompson" does not have to be used. In that context, Thompson sounds like God. Elsewhere in the book, "thompson" with a small "t" is called the supreme leader, which makes him sound like a human being.

Perkinsappears in God, The House

Perkins is the term used to describe the body of Thompson, but he is also defined in the text as the first god of territory, and the head of a "shelter cult." His disciplines forbade sleeping near, in, or on their houses, because they believed the sleeper was the first to be attacked by "the fiend," who fossilized sleepers and ate them.

Johnappears in The House, Persons

John developed the first shirt shelter, or garment hovel. He made these shelters by zipping cloth onto a room or snapping hoods onto windows or dog doors. The narrator refers to John as a "house/garment correlationist." Also, "John" is a term that means to steal.

Monk is a dog that was the Marcus family pet. He was smashed, and young Ben's father said Monk had to go to the other side of the bird (which is the sky) to get fixed. The boy kept Monk's hair in the bottom of his blanket. He wanted to stitch the hair back on the dog, and did not get to say good-bye to Monk.

Cheeser appears to be a pet, probably a dog, that the narrator had when he was a boy. The narrator's father kept smashing Cheeser, trying to get at something valuable inside him, and instructed the narrator to smash him as well. Cheeser had no hair left, and the boy fed him instead of smashing him, in the belief that because Cheeser was hairless, he would protect the boy.

Albert is a darkness person, who nightly kills persons of light. He can change positions under different degrees of darkness. Albert eventually was killed by Mark Parker, a so-called body king, but then a winter Albert arose who Mark Parker had to fight. Mark killed the winter Albert, but Mark also died in the battle.

More summaries and resources for teaching or studying The Age of Wire and String.

The Age of Wire and String from BookRags. (c)2022 BookRags, Inc. All rights reserved.