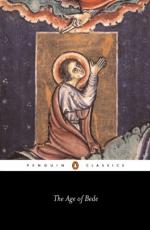 Bede
This Study Guide consists of approximately 30 pages of chapter summaries, quotes, character analysis, themes, and more - everything you need to sharpen your knowledge of The Age of Bede.

The Age of Bede Summary & Study Guide includes comprehensive information and analysis to help you understand the book. This study guide contains the following sections:

This detailed literature summary also contains Topics for Discussion and a Free Quiz on The Age of Bede by Bede.

The Age of Bede is a compilation of a number of documents that concern events and personalities in the sixth and seventh centuries in Ireland and Northern England. It contains a number of important documents from this period, including The Venerable Bede's Life of Cuthbert and Lives of the Abbots of Wearmouth and Jarrow, Eddius's Life of Wilfrid, The Voyage of St. Brendan and The Anonymous History of Abbot Ceolfrith, along with an illuminating introduction by the translators J. F. Webb and D. H. Farmer. All of the personalities discussed and probably all of the authors are monks of English or Irish descent. Thus, the book almost exclusively concerns the lives and activities of various important monks, abbots and bishops.

The Voyage of St. Brendan is a "travelogue" that portrays an account, though largely fictional, of the voyage of St. Brendan and represents a relatively isolated Celtic conception of the monastic life. It was a widely read document in the Middle Ages. The Venerable Bede covers the transformation of this conception of the monastic life in the historical biography of Cuthbert, Abbot of Lindisfarne. Eddius discusses the life of Bishop Wilfred and his tumultuous relationship with local church hierarchy and royal authority for his attempts to impose Episcopal Orthodoxy on England. Bede's Lives of the Abbots discusses the lives and monastery-rule of Benedict, Ceolfrith, Eosterwine, Sigfrith and Hwaetberht most if not all of whom Bede seems to have known personally. Much of the information in Lives of the Abbots is confirmed by the anonymous History of Abbot Ceolfrith.

The "Navigatio" is the most recently written document and has the least information but it does display important information on the personality of the St. Brendan of history who died in 575. The Life of Cuthbert describes the life of Bishop Cuthbert, a Northumbrian born in 634 who was trained as an Irish monk and preferred a life of solitude to running a monastery. In fact he lived as a hermit until 685 and was a bishop for only two years until his death.

Wilfred was a Northumbrian as well. He was both a monk and a bishop and was trained by older Irish monks. However, he was later trained in Rome, the center of Christianity during his day. The ideals and practices of the Merovingian bishops deeply influenced him and he returned to England as an enforcer of ecclesiastical authority who greatly upset local authorities usually leading to his expulsion from his office. He would often have to travel to Rome to request that the Pope intercede on his behalf.

Bede's Lives of the Abbots concerns five abbots and is a work of local history, containing much information about the time. Bede also knew the characters personally and wrote the book within ten years of Ceolfrith's death. The account has the most authentic presentations of the time.

More summaries and resources for teaching or studying The Age of Bede.

The Age of Bede from BookRags. (c)2022 BookRags, Inc. All rights reserved.