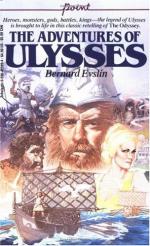 Bernard Evslin
This Study Guide consists of approximately 55 pages of chapter summaries, quotes, character analysis, themes, and more - everything you need to sharpen your knowledge of The Adventures of Ulysses.

The Adventures of Ulysses Summary & Study Guide includes comprehensive information and analysis to help you understand the book. This study guide contains the following sections:

This detailed literature summary also contains Topics for Discussion and a Free Quiz on The Adventures of Ulysses by Bernard Evslin.

"The Adventures of Ulysses" by Bernard Evslin is a modern interpretation of Homer's classic "The Odyssey." The story follows Ulysses' journey to Ithaca, his home, after his efforts in the Trojan War. While being plagued by the god of the sea, Poseidon, Ulysses and his crew falter through many adventures before Ulysses finally finds his way home. "The Adventures of Ulysses" allows the classic tale to be easily understood by readers of all skill levels.

Ulysses' adventures begin during the Trojan War after which he and his crew attempt to return to their homes in Ithaca. Greed causes many of the Hellenes' troubles in the beginning of their voyage. First, the Hellenes land on the island of the Ciconians in order to loot a small village along the coast. The Ciconians rally and attack the Hellenes, forcing Ulysses and his crew to retreat back to their ships leaving eighteen of their men dead on the shore. This hasty retreat damages their ships forcing them to unload their Trojan spoils. These baubles attract a shoal of naiads incurring the anger of Poseidon due to his belief that the Hellenes are attempting to steal his naiads from him. Poseidon convinces Aeolus, his son, to send a gale that drives the Hellenes around the Greek islands toward Libya in Africa.

The Hellenes dock in Libya and sleep. The inhabitants pile lotus-flowers, which induce sleep and dreams, around their visitors. This is the land where Morpheus plays and he hovers over the Hellenes fading their nightmares into pleasant dreams. He is unable to help Ulysses who has a foreboding dream of the monsters he will encounter on his voyage. When Ulysses realizes that the lotus-flowers are causing his men to sleep, he carries the men to the ship individually and sets sail. The Hellenes run out of food so in order to avoid mutiny, Ulysses lands on a mountainous island. Unfortunately, this is the island where the man-eating Cyclops live. Polyphemus entices the Hellenes to his cave with the scent of roasting goat in order to trap and eat them. Ulysses tricks Polyphemus into becoming intoxicated which allows Ulysses time to blind the Cyclops. Clinging to the bellies of Polyphemus' goats, the Hellenes escape their imprisonment to Polyphemus' chagrin. Ulysses makes the mistake of taunting Polyphemus by revealing his name, and Polyphemus prays to his father, Poseidon, to punish Ulysses with a long voyage.

Next, the Hellenes encounter a wall of bronze which they circle until they are pulled through the gate of Aeolus' fortress. Ulysses tells Aeolus the story of his adventures in the Trojan War and since leaving Troy. The god is greatly pleased and grants Ulysses a bag of winds in order to help him return to Ithaca. Just as the Hellenes near Ithaca, Poseidon rouses the greed of several sailors who, thinking the bag holds a treasure, cut open the bag of winds which returns them to the Island of the Winds. Aeolus cannot help Ulysses anymore since it is obvious that the hero is detested by the gods. The Hellenes land on a beautiful island where they are assaulted by giant cannibals and only one ship escapes. After this, they land on an island ruled by Circe who turns the Hellenes into pigs. With Hermes' help, Ulysses thwarts Circe's spells and rescues his men. He lives with the enchantress for a long time before resuming his voyage upon which she tells him that he must first travel to Tartarus. In Tartarus, Ulysses learns of the many misadventures that await him and specifically is warned against eating Hyperion's sun-cattle.

The Hellenes attempt to avoid the dangers foretold in Tartarus and sail directly to Ithaca, but their efforts are thwarted by a group of wandering rocks. Passing through the strait of the Sirens, the crew's ears are blocked, but Ulysses hears and is maddened by the beauty of their song though he is horrified at their hideous appearance. When the Hellenes travel through the strait of Scylla and Charybdis, Scylla steals and eats six members of Ulysses' crew. The Hellenes arrive at Thrinacia and are stranded for thirty days because of a storm with little game to hunt. Eurylochus convinces the men to slay the cattle. Hyperion petitions Zeus for vengeance which is granted in the form of a sea storm which ends the lives of all of the Hellenes except Ulysses who floats on a raft. Ulysses awakes in Ogygia with Calypso, a daughter of the Titans, who teaches him to see the past and future in her fire though she forbids him to see his homeland. When Ulysses sends a crow to bring him word of Ithaca, the news causes him to pray to the gods to kill him if he cannot return home since Calypso forbids him from leaving her. Athene petitions Zeus for Ulysses, and Zeus sends Hermes to command Calypso to release Ulysses. When Poseidon sees Ulysses, he destroys the hero's ship. Lucky, Ino, a nereid, loans Ulysses a veil that will not sink until he swims up a river into Phaeacia.

Nausicaa, the unmarried princess of Phaeacia, rescues Ulysses on the same day that her father is warned by an oracle not to listen to sailors, storytellers or strangers. The king fears incurring the wrath of the gods by breaking the laws of hospitality so he holds a banquet in honor of his guest whom he learns is Ulysses. The king sends Ulysses to Ithaca where Ulysses lands on a lonely shore and dons the clothes of a beggar. As a beggar, Ulysses goes to the home of Eumaeus, his swineherd, who agrees to feed the beggar. That same night, Telemachus returns from searching for news of his father as a party of Penelope's suitors lie in wait to kill the prince. Athene thwarts the suitors' plot and changes herself into a swineherd to greet Telemachus and direct him to Eumaeus' hut. Ulysses cannot restrain himself from revealing his identity to his son and planning his attack on Penelope's suitors. At dusk the next day, Ulysses, dressed as a beggar, arrives at the castle where the suitors abuse him. Still disguised, Ulysses tells Penelope pleasing stories about Ulysses and convinces her to hold an archery contest to decide who her next husband will be. While Penelope announces the contest to the suitors, Ulysses arms himself. None of the suitors are able to string Ulysses' bow. Ulysses shoots an arrow through twelve axe rings and reveals himself. Ulysses, Telemachus, Eumaeus and the neatherd kill the suitors, and Ulysses claims his wife. He promises to teach Telemachus everything his son needs to know because Ulysses is home now.

More summaries and resources for teaching or studying The Adventures of Ulysses.

The Adventures of Ulysses from BookRags. (c)2022 BookRags, Inc. All rights reserved.