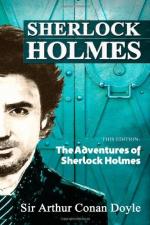 Arthur Conan Doyle
This Study Guide consists of approximately 36 pages of chapter summaries, quotes, character analysis, themes, and more - everything you need to sharpen your knowledge of The Adventures of Sherlock Holmes.

The London police department at the time of these tales. Originally, Sir Peel founded the city's police services in 1829, but by the time of the Sherlock Holmes stories the police are located at Scotland Yard in the Whitehall district of London.

Opium Denappears in The Man with the Twisted Lip

A Legal institution in Victorian England, the opium den was a place, not unlike a bar for opium, where users of the narcotic could go to buy and use opium. Usually located in bad parts of town.

Berylappears in The Adventure of the Beryl Coronet

Gems made from beryllium aluminium cyclosilicate. An emerald is a green Beryl, though there are many different other types of this rare and precious mineral.

Bohemiaappears in A Scandal in Bohemia

A kingdom in what is now the Czech Republic, Bohemia at the time of the story was ruled...

More summaries and resources for teaching or studying The Adventures of Sherlock Holmes.

The Adventures of Sherlock Holmes from BookRags. (c)2022 BookRags, Inc. All rights reserved.