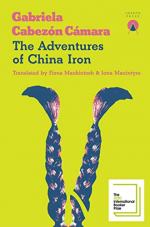 Gabriela Cabezon Camara
This Study Guide consists of approximately 83 pages of chapter summaries, quotes, character analysis, themes, and more - everything you need to sharpen your knowledge of The Adventures of China Iron.

The Adventures of China Iron Summary & Study Guide includes comprehensive information and analysis to help you understand the book. This study guide contains the following sections:

This detailed literature summary also contains Quotes and a Free Quiz on The Adventures of China Iron by Gabriela Cabezon Camara.

The following version of this book was used to create this study guide: Cabezon Camara, Gabriela. The Adventures of China Iron. Charco Press. Translation from the Spanish by Fiona Mackintosh and Iona Macintyre. First Paperback Edition. 2020. A note from the translators included in this edition references the fact that the story and some of its characters are a response to a famous Argentine poem, “Martin Fierro.” The note states that some of the characters and circumstances in the book are based on elements of the poem, but adds that the book reconsiders those elements within the context of the book’s very different themes and characters.

The narrative is divided into three parts, each corresponding to a physical phase of its central character. That character is the youthful China Iron, who is both hardened by the life she has lived and naïve about life in general. Part One is titled “The Pampas,” and focuses on China’s experiences traveling across Argentina’s broad plains, or pampas. This setting serves as something of a metaphor for the psychological and emotional openness that China finds in herself as she goes on her journey after leaving the situation into which she was married. The man she identifies as her husband, Martin Fierro, was abusive and controlling, which means that she was relieved when he was conscripted into military service. (Martin Fierro and his conscription are both key elements in the poem upon which events of this story are based. Meanwhile, the narration reveals that the story is set in the early 1900’s, relatively early in what has come to be known to history as the Industrial Revolution and in the midst of the complex, evolving relationship between Great Britain and Argentina.)

The relationship between Great Britain and Argentina plays out metaphorically, and in miniature, in the relationship between China and a beautiful, pale, red-headed woman named Liz. Liz is from Scotland, which is part of Great Britain. After China accidentally encounters Liz and her wagon – i.e. a home on wheels drawn by oxen – she is immediately taken on board as a traveling companion. As they travel across the pampas, Liz introduces China to the English language, to manners and art and culture, and to sex. They also encounter Rosa, a gaucho (i.e. cowboy) traveling with a herd of cattle. Rosa joins them, and together they journey towards Liz’s job as the co-manager of an estancia (i.e. ranch) with her missing husband, somewhere in Indian territory. As a means of protecting herself on the journey, China cuts off her braid and disguises herself as a boy. In doing so, she finds herself being drawn closer to Liz both emotionally and sexually.

The second part of the novel is titled “The Fort,” which also describes its setting – specifically, Las Hortensias, the base of operations for the militaristic, sadistic, self-indulgent Colonel Hernandez. Hernandez is also a character in Martin Fierro, with the Fort and several of the circumstances that China describes also appearing in the poem. In both the novel and the poem, for example, Martin Fierro served Hernandez in the Fort, was tortured, and eventually escape. Other circumstances in both the novel and the poem include Hernandez’s capacity for both drunkenness and cruelty, as well as his manipulation of the inhumane living conditions of those who work for him. China observes with both close attention and jealousy as Liz works hard at charming and manipulating the Colonel. Her jealousy increases even though Liz is paying more and more attention to her sexually. Eventually, Liz and China and Rosa enact a plan to sneak away from the Fort with some of the Colonel’s horses and gauchos, needing both to populate and run Liz’s estancia.

In Part Three, titled “Indian Territory,” China and the others manage to escape safely from the Fort, only to encounter a large and watchful group of Indians. The travelers are initially afraid, responding to what they had been told about the violence of Indians. Instead, they find themselves welcomed and cared for, as well as being opened to different forms of understanding, loving, and living. They also find both Liz’s husband Oscar and Martin, both of whom now have families and both of whom have been transformed into softer, less stereotypically masculine versions of themselves. China and the others find themselves absorbed into the community and way of life led and by the Indians, becoming nomadic in their search for both safety and resources. As the novel concludes, China describes that community as dissolving and eventually disappearing into a “white cloud” (188). The metaphoric implications of this image suggest that the community is not only disappearing, but so too is the way of life it has shaped and chosen, vanished in the face of industrialization and militarization, embodied throughout the book by Hernandez and Great Britain.

More summaries and resources for teaching or studying The Adventures of China Iron.

The Adventures of China Iron from BookRags. (c)2022 BookRags, Inc. All rights reserved.