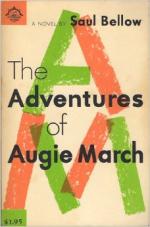 The Adventures of Augie March Topics for Discussion

Saul Bellow
This Study Guide consists of approximately 96 pages of chapter summaries, quotes, character analysis, themes, and more - everything you need to sharpen your knowledge of The Adventures of Augie March a Novel.

What functions does the elderly poodle Winnie play in the novel?

What functions do Thea's snakes play in the novel?

What do Augie's various forays into petty crime contribute to his memoirs? Pick one and analyze its particular significance.

How is organized crime—the Mob—depicted in this novel? Does Augie March subscribe to the romantic cast it is often given in popular culture?

Discuss Simon March's role as a Horatio Alger figure. How does he symbolize the advantages and pitfalls of wealth?

Discuss William Einhorn's heroic struggle with profound disabilities. How does his sexual appetite affect and inform that image?

Augie March has a penchant for attracting benefactors. Select the one that helps him most, discussing how and why, and contrast the one that you believe most retards his development.

Like Job in the Bible, Augie March has many "friends" willing...