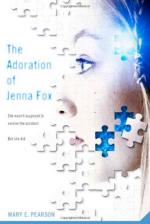 Mary E. Pearson
This Study Guide consists of approximately 51 pages of chapter summaries, quotes, character analysis, themes, and more - everything you need to sharpen your knowledge of The Adoration of Jenna Fox.

The Adoration of Jenna Fox Summary & Study Guide includes comprehensive information and analysis to help you understand the book. This study guide contains the following sections:

This detailed literature summary also contains Topics for Discussion on The Adoration of Jenna Fox by Mary E. Pearson.

"The Adoration of Jenna Fox" is a story of how far parents will go to save their only child, and of how far a child will go to become her own person. Jenna Fox is adored by her family, but their adoration goes too far when they scientifically modify her after an accident to save her life, to the point she is barely human. Jenna struggles to discover what is it that defines a human, and therefore, what it is that defines herself as her journey for personal freedom unfolds.

"The Adoration of Jenna Fox" by Mary E. Pearson is a combination of science fiction, coming of age, and romantic elements, combined with questions of ethical and moral significance that makes the novel an important read. Jenna Fox wakes from what she is told was a year long coma to find she recalls little of her life. Over the course of time, she begins to gain some memory, but the recollections she discovers do not fit in with what she is being told. Her parents clearly adore her, but her grandmother seems aloof, and Jenna finds she can not recall having any friends or other family. As Jenna grows stronger, her demands do as well, but she finds at times she seems almost powerless over the will of her parents.

When Jenna is finally allowed to attend school, she is taken to a progressive school for children who have been scientifically altered or are otherwise different. Jenna learns she too has been modified by Blue Goo or Bio Gel, a substance that doctors use to help substitute organs and limbs when they are damaged or ill. Bio Gel can be used for nearly everything in the body, but to control the modifications of humans, the Federal Science Ethics Board limits each person to a point system, where each is only allocated one hundred points. A Bio Gel heart, for example, is worth thirty five points. Jenna learns through her grandmother, that following a severe accident, Jenna should have died. The friends in the car with her died. But Jenna's father, the inventor of Bio Gel, was able to save ten percent of her brain and was able to use Bio Gel to rebuild Jenna's body using that saved part. He uploaded brain scans of her memories into computers,and then used those scans to download the information into the new brain and body.

When Jenna learns her parents have retained backup copies of her own brain scan, as well as those of her friends, Jenna realizes she must set them free. She herself is torn, unsure if she is human or has a soul, but she does know that the backup copies are in limbo, merely waiting to die. With the help of her new friends and her grandmother, Jenna destroys the backups, leaving just her own modified body to either survive or perish as a normal person would experience. When another friend, Allys, begins to die from internal disease, Jenna's father again uses Bio Gel to recreate her, thereby violating the laws again, but saving her life. Two hundred years later, Jenna and Allys still live, educating the world about others like them. "The Adoration of Jenna Fox" shows not only the lengths parents will go to in order to save a child, but also debates the idea of what components make us human beings.

More summaries and resources for teaching or studying The Adoration of Jenna Fox.

The Adoration of Jenna Fox from BookRags. (c)2022 BookRags, Inc. All rights reserved.