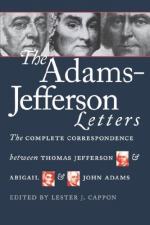 The Adams-Jefferson Letters: The Complete Correspondence Between Thomas Jefferson and Abigail and John Adams Summary & Study Guide includes comprehensive information and analysis to help you understand the book. This study guide contains the following sections:

This detailed literature summary also contains Topics for Discussion and a Free Quiz on The Adams-Jefferson Letters: The Complete Correspondence Between Thomas Jefferson and Abigail and John Adams by Lester J. Cappon.

John Adams and Thomas Jefferson were, respectively, the second and third presidents of the United States and crucial members of the Founding generation of the United States. The two men were friends for over fifty years and engaged in a correspondence over nearly that entire period, a correspondence that remains among the most famous in history. Only in The Adams-Jefferson Letters is the complete set of letters compiled for the first time.

The letters cover many mundane matters but also a wide range of issues, from government, philosophy and religion, to family grief and joy. Including within the correspondence is also Jefferson's correspondence with Abigail Adams, who cover, to a far lesser extent, many of the same matters.

Early in the letters, Adams and Jefferson mostly discuss political matters, but as the years wear on, particularly after their mutual retirements from politics, the two men turn to philosophical matters. For their entire lives, Adams and Jefferson were students of history and political science, having a key role in the design of the United States's government. Their role in the creation of the nation is something they remained proud of throughout their lives.

The editor of the Adams-Jefferson Letters, Lester J. Cappon, has organized the letters into thirteen chapters covering thirteen time periods of Adams and Jefferson's lives. While the letters themselves contain a number of matters not relevant for the summary, Cappon brings out the deep issues of the letters of the particular time period in helpful introductions at the beginning of each chapter. One is left with the impression that these two Founding Fathers are worthy of their high reputation, despite the foibles, vices and struggles both men dealt with.

Chapter five, running from January to October 1787, focuses in part on the events leading up to the ratification of the United States Constitution and reviews a number of matters concerning the structure of good government. And chapter six, from November 1787 to May 1789, in part focuses on securing loans and credit from the Dutch for the new American Republic.

Chapter seven covers the time period from April 1790 to March 1801. Both men served in President Washington's administration during this time and Jefferson as Vice-President under Adams until 1801, so they exchanged few letters but interacted a great deal. Chapter eight runs from May to October 1804, during the few letters exchanged during their estrangement over political matters. Chapter nine, from January 1812 to June 1813, shows their reconciliation and the resumption of their correspondence.

Chapter ten (June - December 1813) reviews a variety of philosophical matters, as does chapter eleven (January 1814 to May 1816). This time also sees the two men discuss the issues and events surrounding the war of 1812. Chapter twelve, August 1816 - December 1819, discusses Jefferson's project of creating the University of Virginia and educational reform generally. And chapter thirteen (January 1820 - April 1826) contains the last of the two men's letters, their final reflections on their lives and the like.