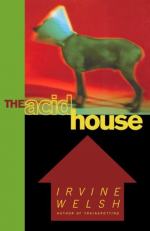 Irvine Welsh
This Study Guide consists of approximately 40 pages of chapter summaries, quotes, character analysis, themes, and more - everything you need to sharpen your knowledge of The Acid House.

This detailed literature summary also contains Topics for Discussion on The Acid House by Irvine Welsh.

Brianappears in A Smart Cunt

Brian is the protagonist in the collection's novella, "A Smart Cunt." Like the narrators of other stories in the book, he is quick-witted, rebellious, a heavy drinker and drug abuser, and has a strong antisocial streak that shades into criminal tendencies, yet he also is capable of remorse and even self-hatred over the bad things he does. The book's author, Irvine Welsh, does not present Brian or the narrators of other stories in a forgiving light, yet in showing that they sometimes agonize over their wrongs, he implies that they would be better people if they had not been raised in such morally impoverished surroundings. Brian and the other narrators, Jock, Euan, and Graham, appear to be alter-egos of the author, especially because they are more intelligent than the other roughnecks with whom they associate, and because most of the stories are told by them in first person. Usually, the protagonists are led into trouble through a combination of alcohol, drugs, and deplorable behavior initiated by others, but they are never unwilling participants. No hint is offered that the book's protagonists are not responsible for what they do, or that they should be forgiven their trespasses. Instead, the circumstances under which they cause trouble are presented as the primer mover of all this chaos. In other words, the protagonists cannot be absolved of the choices they make, but the author seems intent on making the point that these characters get into such mischief because of underlying societal weaknesses.

Ronnieappears in A Smart Cunt

Ronnie is probably the closest friend of Brian in the novella, although the paradox is that Brian does not like him very much. Ronnie is a sketchy personality type in the story, because he is unfailingly stoned on drugs, mumbling and only partially conscious. He tends to stumble in and out of scenes, saying very little, staring into space, and falling asleep often. In one scene, he is so catatonic that Brian and his other so-called friends cover him in filth and leave him, worried about his rage when he awakens, because he apparently has the potential to be violently vengeful. He later forgives Brian, does not seek revenge, and Brian becomes his best man at his wedding. How Ronnie manages to attract a bride is part of the black comedy that pervades this book. At first, his girlfriend seems oblivious that he is a hopeless addict, and when she finally realizes it, she accepts it with a shrug. Only later, when Ronnie takes up Nintendo, does his new wife complain that she liked him better when he was obsessed with drugs. Brian is relieved when Ronnie marries, because the new domestic situation takes Ronnie off his hands. This is significant, because Brian actually needs to wash his hands of all his friends, who have no interests beyond getting stoned and causing mayhem. Ronnie is the extreme example of how the wrong friends in the wrong environment can lead to a dead-end life.

Ollyappears in A Smart Cunt

Olly, which is short for Olivia, is Brian's girlfriend for a while in the novella. She first enters the story as a woman who supposedly had sex with Brian's bisexual friend, which bothers Brian, because Olly had once rebuffed his advances. After an acquaintance hits Brian in the face with a glass at a bar, Olly takes him to the hospital and later brings him home. Their affair is blackly comic, in that they appear to be using one another for sex, and yet neither of them feels used, because this is the norm for both of them. At one point, Brian reflects to himself that he prefers to make love with someone he cares about, rather than merely having sex, but he also seems quite comfortable with the casual arrangement. After the two break up, they encounter each other socially and are friendly, but neither one pines for the other. Brian thinks Olly was trying to be like her friends when he first met her, and her friends were trying to be like other people, but later he believes she has progressed to simply wanting to be like the other people that her friends want to be like. This characterization of someone as envious of the envious is a cruel but witty assessment of the hapless Olly.

Craig Giffordappears in A Smart Cunt

Craig Gifford is the victim of the worst crime in the novella and, indeed, in the book. He is killed by Roxy, with Brian's participation, after which the two rob the body and spend the money in bars. Neither of his killers even now his real name, instead referring to him as Blind Cunt, because he is blind. Gifford is an annoying person, given to making petty corrections of whatever anyone says. Brian and his friends drink with him, but they do not like him. On the night of the murder, after Gifford leaves the bar, Roxy notes that he was flashing a lot of cash, and concocts the plan to rob him. After Roxy hits him with a piece of slate, Brian kicks snow in his face, but later he admits that he actually kicked Gifford in the head and therefore may have contributed to the brain hemorrhaging that led to his death. The murder of Gifford leads to later shows of remorse by both Roxy and Brian, yet their principal concern is obviously that they might get caught and punished for the crime. Near the end of the novella, Roxy takes Brian to the graveyard where Gifford is buried, which is where Brian learns his victim's name. When Roxy urinates on the gravestone, Brian attacks him, and is thrashed for this show of conscience. In the story, Gifford's murder represents the extent of the heartlessness of which Brian and his mates are capable.

Jeffappears in A Smart Cunt

Jeff is Brian's father. He comes across as an upstanding, although rough-hewn fellow who raised his two sons after their mother abandoned the family. Later, however, it becomes evident that for years he lied in contending that his wife never made contact or asked to see the boys. In fact, she had written repeatedly, pleading to see her sons, and Jeff had never told them. This revelation at the end of the novella is the last in a series of betrayals Brian has endured throughout the book.

Tinaappears in A Smart Cunt

Tina is Ronnie's girlfriend, who later becomes his wife. She is classically clueless. At one point, asks Brian to accompany her and Ronnie to her parents' house, so her parents can see that not all of Ronnie's friends use drugs. Brian is astonished, given that he uses alcohol and drugs nonstop. After Tina marries Ronnie but then loses interest in him because he starts playing too much Nintendo, she goes to a bar with Brian and falls into the arms of the first available man. The mindlessness of the characters in this book is represented by Tina in terms of romantic entanglements.

Mr .Gleaves is the manager who gives Brian a job on the parks service, and who only suspends him with pay after learning he was under the influence of drugs while on the job. After Brian goes to London and then returns to Edinburgh, Mr. Gleaves rehires him. A hopeful, kind liberal who either cannot see or will not look at hard truths, Mr. Gleaves is liked by Brian, yet with a hint of contempt in his good will toward the manager.

Chrissie is a transsexual in the collection's opening story, "Eurotrash." Her sex change operation is revealed as a surprise near the end of the story, and this information casts her life and actions in a more forgivable light. She is a harsh and vindictive character.

Richard is the gay bartender who was Chrissie's lover when she was Christopher. He is a sad figure, betrayed by Chrissie, who nevertheless clings to him for emotional support. He loved Christopher and retains his loyalty to Chrissie, as well as keeping the secret of her transexuality.

Jim Banksappears in The Last Resort on the Adriatic

Jim Banks is the protagonist of "The Last Resort on the Adriatic." On a sea cruise after the suicide of his wife, he meets a woman but feels that he cannot shake his loyalty to his former spouse. At the end of the story, he is about to jump over the side of the ship into the ocean, committing suicide in the way, on the same cruise, as did his late wife.

Lou Ornsteinappears in The Two Philosophers

Lou Ornstein is an American philosopher visiting Scotland in "The Two Philosophers." He gets into a drunken debate with his Scottish colleague about the same philosophical points over which the two rivals argue every time they meet. This time, they are goaded into a fistfight to settle the issue, and after Lou punches his friend, he is surprised to discover that he has a knack for fighting, and likes it.

John Deaf, the title character of one of the short stories, is a strong, teenaged boy who is both deaf and dumb. Caught in a dalliance with another character's sister, he beats up the boy, but when he goes downstairs, he finds that his grandfather has died sitting in his chair. John Deaf leaves town and never returns.

Boab Coyleappears in The Granton Star Cause

Boab Coyle is a character in "The Granton Star Cause" who loses his position on the social football team, is kicked out of the family home by his parents, dumped by his girlfriend, loses his job, gets arrested and beaten by the police, is slugged by a restaurateur, and then is turned into a fly by God. His unwitting mother then swats him, and he dies.

Coco Bryceappears in The Acid House

Coco Bryce is the protagonist of the story, "The Acid House." He is hit by lightning in the same storm during which a woman is giving birth to a child in an ambulance that also is hit by lightning. Coco goes into a coma, but his mind enters the body of the newborn infant. When Coco emerges from the coma, his mind is effectively erased, and he starts life anew as an adult, while the baby starts life with the fully formed mind of the old Coco.

Veitchappears in A Smart Cunt

Veitch, one of Brian's friends in the novella, is so stupid that he allows a drug dealer to keep his wares at Veitch's apartment, putting himself rather than the dealer at risk of a bust.

Simmyappears in A Smart Cunt

Simmy, one of Brian's mates in London, is an amphetamines addict who is as wild as Brian's friends in Edinburgh.

Nazneemappears in A Smart Cunt

Nazneem is a young woman in London who befriends Brian, although she does not succumb to his desire to have an affair.

Marianneappears in The Last Resort on the Adriatic

Marianne has a brief affair with the main character, Jim, in "The Last Resort on the Adriatic."

Raymie Airlieappears in A Smart Cunt

More summaries and resources for teaching or studying The Acid House.