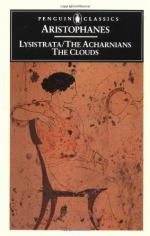 The Acharnians [and] the Clouds [and] Lysistrata Summary & Study Guide

Aristophanes
This Study Guide consists of approximately 48 pages of chapter summaries, quotes, character analysis, themes, and more - everything you need to sharpen your knowledge of The Acharnians [and] the Clouds [and] Lysistrata.

The Acharnians [and] the Clouds [and] Lysistrata Summary & Study Guide Description

The Acharnians [and] the Clouds [and] Lysistrata Summary & Study Guide includes comprehensive information and analysis to help you understand the book. This study guide contains the following sections:

This detailed literature summary also contains Topics for Discussion and a Free Quiz on The Acharnians [and] the Clouds [and] Lysistrata by Aristophanes.

This collection of three plays by the Classical Greek playwright Aristophanes satirizes various aspects of the society and culture of Athens several centuries before the birth of Christ. The first and third ("The Acharnians" and "Lysistrata") focus on the city's need for, but resistance to, a lasting peace with its enemies. The second, "The Clouds," focuses on the new (at the time) style of learning and philosophy as taught by the renowned Socrates. Throughout all three plays, there are undercurrents of explicit sexuality as well as thematic explorations of the foolishness of holding too tightly to traditional ways, and how the disempowered find power.

The first play of the collection, "The Acharnians," begins with a long soliloquy by Athenian citizen Dikaiopolis, who expresses his frustration with the drawn out process of trying to build peace between Athens and its various enemies, a process that (as the narrative later reveals), is highly corrupt. The assistance of a so-called minor deity, Amphitheus, empowers Dikaiopolis with a personal peace, which he attempts to pass on to the war-like Acharnians, angry with Dikaiopolis for intervening in there ongoing confrontations with the confrontational Sparta. Dikiaopolis enlists the aid of renowned playwright Euripides and strives to convince the Acharnians that peace is in their best interest. As part of his argument, he demonstrates the potential for economic growth in peacetime by setting up a market and doing successful business with a pair of merchants. After concluding his transactions, Dikaiopolis celebrates his success with a self-cooked banquet, both angering and mocking his warrior neighbor, Lamachus. At the same time, however, Dikaiopolis refuses to share his secret for peace with others, eventually becoming drunk on peace but still being hailed by the now peaceful Acharnians as a hero.

In "The Clouds," the second play of the collection, the wily Strepsiades attempts to enlist his son Pheidippides in the ways of the so-called New Learning, as taught by the controversial but nevertheless respected Socrates, so that he (Strepsiades) can maneuver his way out from under his burdensome debts. Pheidippides refuses outright, so Strepsiades goes to Socrates himself, and is surprised to find that Socrates and his learning are both inspired not by the traditional gods, but by The Clouds, whose presence Socrates invokes and who come down to earth to teach Strepsiades. The generally stupid Strepsiades misunderstands and misapplies the teachings of both Socrates and The Clouds, but doesn't understand what has happened until Pheidippides, who has finally gone to study with Socrates, reveals to him the negative side of Socrates' techniques of philosophical argument. Driven to an extreme of anger by Pheidippides' attitude, Strepsiades sets fire to Socrates' home. The Clouds return to the sky, speaking of how their job is done.

The final play of the collection is "Lysistrata," in which the women of Greece unite behind the forceful leadership of an Athenian woman, Lysistrata, in a desperate effort to bring peace to their country. Specifically, they decide to withhold sex from their men until they refuse to go to war ever again. Many of the women are initially resistant to the idea, saying they love sex too much to give it up. Lysistrata convinces them, however, and soon the men become angry and frustrated, not to mention painfully engorged, at the situation. Even though some of the women weaken, and even though the men prove both manipulative and clever, Lysistrata's plan eventually works. Delegations from Athens and Sparta, the principal players in Greece's ongoing wars, negotiate peace using the nude body of Lysistrata's ally, Reconciliation, to map out who is going to take control of which territory. The play ends with a song and dance in which the striking women and their horny husbands are happily reunited.

More summaries and resources for teaching or studying The Acharnians [and] the Clouds [and] Lysistrata.

The Acharnians [and] the Clouds [and] Lysistrata from BookRags. (c)2022 BookRags, Inc. All rights reserved.