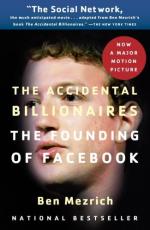 The Accidental Billionaires: The Founding of Facebook Summary & Study Guide

The Accidental Billionaires: The Founding of Facebook Summary & Study Guide includes comprehensive information and analysis to help you understand the book. This study guide contains the following sections:

This detailed literature summary also contains Topics for Discussion and a Free Quiz on The Accidental Billionaires: The Founding of Facebook by Ben Mezrich.

"The Accidental Billionaires - The Founding of Facebook," by Ben Mezrich, is the story of boy genius and computer whiz Mark Zuckerberg and how he took the idea of a social networking site to heights that no one else ever imagined. Eduardo Saverin was a senior at Harvard when he met a young sophomore with a mop of curly hair, a faraway look in his eyes and regardless of weather or occasion, always wore cargo shorts, a hoodie, and Adidas flip-flops. The kid already had a reputation as a computer genius. He had created an Internet version of the board game Risk and a program for Harvard students called Cross-Match which would allow students to find out who was registered for what classes.

Zuckerberg had been thinking about social networking site for some time but so had dozens of other Harvard students. After being rejected by a girl one night, a slightly inebriated Zuckerberg logged onto his Kirkland dormitory facebook, which contained photos of all the students in his dorm. Out of creativity and a little anger, he created Facemash.com. To do so, he hacked into the Harvard University computer system and gathered the photos of all the students at Harvard. Perhaps to get back at the girls who had rejected him, Zuckerberg featured photos of pairs of girls, asking users to vote on was the best-looking. In his blog, he admitted that he first was going to feature photos of girls against farm animals for the contest. The site launched before he had anticipated and was so popular that the traffic proved to be too much for Harvard's bandwidth. Zuckerberg was in trouble with Harvard for hacking their system and with feminist groups and female students for his blog comments and his misogynistic contest. He was told to behave and was placed on probation until his graduation.

As Facebook began to grow in popularity, it expanded to other universities and was taking on thousands of new members a day, it was obvious that the funding initially provided by Saverin could not keep up with the expenses required to keep the site growing and functioning. A savvy Californian, Sean Parker, who had created Napster as a high school student, caught the whiff of success in the air when he spotted facebook. He came on board and was able to introduce Zuckerberg to investors who saw dollar signs when they realized the rapid and unstoppable growth of Facebook.

After Zuckerberg, who quit Harvard, moved his operation to the San Francisco area and teamed up with Parker, it wasn't long before Saverin was squeezed out. Jeff Thiel, who had developed PayPal, invested $500,000 in Facebook just to keep it above water. By its fourteenth month of operation, Facebook had millions of members and was worth over $100 million. When Parker was arrested at a party, Zuckerberg fired him as Facebook's president. Zuckerberg would not let anyone or anything damage Facebook.

Eventually, the Connect U team and Eduardo brought separate lawsuits against Mark Zuckerberg. It was publicized that the twins received $65 million but were still determined to gain even more monetary awards from Zuckerberg. Saverin's settlement was not publicized but his name suddenly appeared back on Facebook as a co-founder. By 2009, Facebook had over 200 million members. No one knows what Mark Zuckerberg, CEO of Facebook, is worth but it is accepted as fact that he is the youngest self-made billionaire ever.