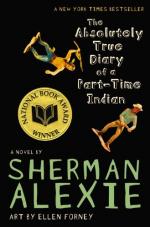 Sherman Alexie
This Study Guide consists of approximately 32 pages of chapter summaries, quotes, character analysis, themes, and more - everything you need to sharpen your knowledge of The Absolutely True Diary of a Part-time Indian.

The Absolutely True Diary of a Part-time Indian Summary & Study Guide includes comprehensive information and analysis to help you understand the book. This study guide contains the following sections:

This detailed literature summary also contains Topics for Discussion and a Free Quiz on The Absolutely True Diary of a Part-time Indian by Sherman Alexie.

Arnold Spirit, Junior, lives on the Indian Reservation near the town of Wellpinit. He attends school there and is completely excited about beginning high school. He is especially looking forward to studying geometry. Then he's given his book and discovers it is the same book his mother used in high school. He's so furious that the school can't replace books even once a generation that he slings the book at the teacher, breaking his nose. Junior is suspended which upsets his parents and grandmother greatly. Then Junior's teacher, Mr. P, tells Junior that he should attend a school off the Reservation. Junior thinks about the advice and presents his plan to his parents, who back him.

Junior begins school at Reardan High School and is initially ignored and teased. He gets into a fight with a guy who makes racist comments then befriends a boy who is very smart. Junior is soon enamored with a girl named Penelope and when he and Penelope become something of an "item," Junior's popularity is sealed. He makes the basketball team and is happy with his life at Reardan, despite the fact that he often has to walk all or part of the distance because his parents have such limited resources.

When Junior faces Rowdy on the basketball court, he's subjected to anger and actually receives a concussion that takes him out of the game. When the next game begins, Junior rushes to take the lead from Rowdy and the Reardan team wins easily. Junior is quickly ashamed of his desire for revenge because he knows the difficult lives lived by most of the team.

Junior's life is filled with death, much of it because of alcohol. His grandmother is run over by a drunk driver and dies. His father's best friend is shot in the face and killed over a drink. Then Junior's sister is drunk in her trailer with her husband when a fire consumes the trailer. Junior's sister never even wakes as she is burned to death.

As the story comes to a close, Rowdy comes to visit after school is out for the summer. Rowdy says he's still angry at Junior but is bored. Rowdy reveals that he'd always known Junior would decide to leave the Reservation and makes him promise to send postcards from wherever he travels. The two then spend the evening and into the night playing one-on-one basketball, but they don't keep score.

More summaries and resources for teaching or studying The Absolutely True Diary of a Part-time Indian.

The Absolutely True Diary of a Part-time Indian from BookRags. (c)2022 BookRags, Inc. All rights reserved.