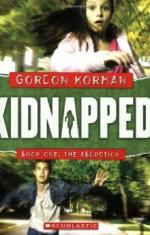 Gordon Korman
This Study Guide consists of approximately 42 pages of chapter summaries, quotes, character analysis, themes, and more - everything you need to sharpen your knowledge of The Abduction.

The Abduction Summary & Study Guide includes comprehensive information and analysis to help you understand the book. This study guide contains the following sections:

This detailed literature summary also contains Topics for Discussion on The Abduction by Gordon Korman.

Kidnapped: Book One The Abduction by Gordon Korman is a coming-of-age story set against a classic kidnap scenario. Aiden Falconer, a junior high school student, watches in terror as Meg, his younger sister, is abducted in broad daylight by three brazen but masked individuals. Aiden must convince the reluctant FBI to believe him when he uncovers a major clue as to where Meg is being held by her captors, but the federal law agency is reluctant to put faith in a young person who is not trained.

When the book begins, Aiden and Meg Falconer are not strangers to notoriety. Earlier, they have been on the run from the FBI and nationwide police authorities when their parents were wrongly accused of aiding terrorists in a spoiled plot. Despite the fact that the Falconers were all labeled traitors, that his parents were held for a long time in prison, and that Aiden and his sister have been ostracized at school, Aiden knows as well as the rest of his family the sad perception by most of the American public. Most viewers of television feel the family is still guilty of treason to the United States, despite the fact they were dutifully cleared of all charges and accusations.

Agent Harris from the FBI is the main reason the original Falconer case was bungled. As a result, he carries a guilt complex about the family. When Meg is abducted in broad daylight by three masked individuals, Agent Harris sees an opportunity to right himself with the Falconers. However, Mr. and Mrs. Falconer are understandably reluctant to trust him. But when it becomes clear he is their only hope to seeing their daughter alive again, they agree.

Meg never gives up and fights constantly for her freedom. Eventually a note she leaves is discovered by an FBI agent who searches for her in an industrial warehouse. The agent actually frees her from captivity, but Meg conks him on the head, believing him one of her abductors. She escapes, only to be forcibly grabbed by two of her actual kidnappers. Meanwhile, Aiden acts as the "bag man" and carries the ransom money to an arranged location. He receives instructions there to ride a bus to a street carnival in progress. A clown grabs the ransom money bag. It is the third kidnapper in clown makeup!

Aiden and his friend Richie chase down the clown and recover the ransom, but the clown escapes in the melee. The book ends with Aiden uselessly trying to comfort his parents and vowing to do whatever it takes to help the FBI find and rescue his kidnapped sister.

More summaries and resources for teaching or studying The Abduction.

The Abduction from BookRags. (c)2022 BookRags, Inc. All rights reserved.