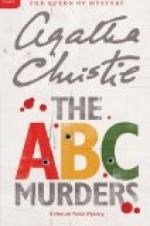 This Study Guide consists of approximately 41 pages of chapter summaries, quotes, character analysis, themes, and more - everything you need to sharpen your knowledge of The A.B.C. Murders.

This detailed literature summary also contains Quotes and a Free Quiz on The A.B.C. Murders by .

The following version of this book was used to create this study guide: Christie, Agatha. The ABC Murders. HarperCollins Publishers, 2011. Originally published in 1936.

Hercule Poirot is an acclaimed detective, originally from France, but currently retired from Scotland Yard in England. He and his friend Captain Hastings yearn for more mystery in their retired lives when, suddenly, Poirot receives a letter from an unknown source. It details a murder of someone unknown that will take place in Andover. Signed by ABC, this murder actually does happen to a Mrs. Ascher, a small shop owner. Poirot and Hastings look into the murder, but the only strange thing is the ABC railway guide that was left face down on the counter. This murder does not take much notice by the press as it happened in a small town and to an elderly lady with an angry ex-husband.

The next letter Poirot receives details a murder in Bexhill. Although the authorities are put on guard about the potential for this to be connected, Betty Barnard is still murdered. She is a young, beautiful waitress at the local seaside restaurant. The only connection between the two murders, besides the continuation of the alphabet, is the ABC railway guide found near them. This murder is much more publicized than the last one and Poirot and the Scotland Yard team working on this case decide to publish the letters and warn about any upcoming murders. Unfortunately, the letter about the upcoming murder in Churston goes astray, and arrives late. By the time that Poirot receives the letter it is the night before the intended murder. Sir Carmichael Clarke is murdered, the heir to a wealthy estate and husband to the dying Lady Clarke, this murder is, like the Bexhill murder, more publicized and widely spread.

Hastings, after the case, has compiled stories from not only Poirot but from other narratives happening at the same time. Through these murders, the narrative of a Mr. Alexander Bonaparte Cust is detailed. He is a traveling salesman who has been at the site of every murder, and when the Doncaster murder is revealed in a letter to Poirot, he goes to Doncaster, sent there on business.

By this time, the members of the families of the victims have coalesced a Special Legion to help with the case. In this group is Mary Drower, niece of Mrs. Andover, Megan Barnard, sister of Betty Barnard, Donald Fraser, boyfriend of Betty Barnard, Thora Grey, secretary to Sir Carmichael Clarke, and Franklin Clarke, brother of Sir Carmichael Clarke. They want to help Poirot with the murder and so they go to Doncaster where a Mr. George Earlsfield is murdered. A mistake? Poirot leans on this mistake in order to figure out who the real murderer is.

Alexander Bonaparte Cust finds himself with the knife that killed George Earlsfield and the blood on his coat. His landlady’s daughter goes to Poirot to tell Poirot about the murder, and before the police can get there, Cust runs off. He ends up in Andover, the scene of the first murder, and hands himself in to the police, by collapsing on their doorstep (he suffers from epilepsy). After some investigation, however, it would appear that he is not the murderer.

Poirot, in a dramatic unfolding, points to who is the real murderer. Motivated by jealousy and wanting money, Franklin Clarke murdered these people to disguise the murder of his brother, thinking that it might not cause so much attention if it were part of a larger group.

More summaries and resources for teaching or studying The A.B.C. Murders.