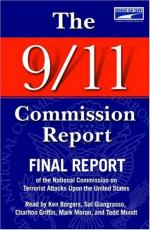 This detailed literature summary also contains Topics for Discussion and a Free Quiz on The 9/11 Commission Report by Various.

The Commission's report examines all aspects of the terrorists' planning and preparation for the attacks and the government's response, or lack thereof, to the terrorists' activities. Its investigation sought to expose all mistakes and missed opportunities that could possibly have prevented the attacks.

The report begins by painting explaining what happened on September 11, 2001. It then explores the history of modern terrorism, with an emphasis on the roots of al-Qaeda and its leader, Osama bin Laden, the perpetrators of the 9/11 plot. The founding and growth of al-Qaeda is reconstructed along with a parallel examination of the U.S. government's efforts to track and counter it. Concern within the government about the danger posed by al-Qaeda grew steadily throughout the 1990s. Al-Qaeda's terrorist ambitions and animosity toward the United States steadily escalated.

The Commission then tracks the beginnings of the 9/11 plot within Qaeda and traces the planning and growth of the plot over several years. As the 1990s drew to a close, numerous U.S. officials were pressing for decisive action against al-Qaeda. The government's efforts, however, were repeatedly thwarted by a lack of political will, legal impediments, and concern about public opinion. Al-Qaeda managed to plant operatives within the U.S. who began training at flight schools. Some intelligence and FBI officials became suspicious, but bureaucratic hurdles and a lack of inter-agency communication prevented further investigation.

By the summer of 2001, U.S. security and intelligence agencies had become alarmed as intelligence indicated that planning for a major attack was nearing completion. Yet, specific information on the nature of the plot was not available.

The events of September 11, 2001, are then examined in great detail and from several points of view. The police and fire response to the World Trade Center is traced from the first reports of a plane crash. As the disaster unfolded, its magnitude overwhelmed any ability to contain or control events. Yet, thousands of people were rescued.

The response to the attack is then examined. The war on terrorism is launched. This war was not to be merely retaliation against al-Qaeda but, rather, a generational struggle against terrorism in general. While the initial phases of the war are military in nature, over time it is expected to become a war of ideas.

Finally, the Commission recommends a plan for the reorganization of the U.S. government to address past mistakes and to better prepare for the challenges posed by terrorism.