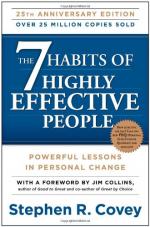 Summary
+Chapters Summary and Analysis
Inside Out
The 7 Habits – An Overview
Habit 1: Be Proactive
Habit 2: Begin with the End in Mind
Habit 3: Put First Things First
Paradigms of Interdependence
Habit Four: Think Win/Win
Habit 5: Seek First to Understand, Then to Be Understood
Habits 6 and 7 and Inside Out Again
Important People
Objects/Places
Themes
Styles
Quotes
Topics for Discussion
Order our The 7 Habits of Highly Effective People Study Guide

Stephen R. Covey
This Study Guide consists of approximately 29 pages of chapter summaries, quotes, character analysis, themes, and more - everything you need to sharpen your knowledge of The 7 Habits of Highly Effective People.

The Inside-Out Process stresses the importance of achieving private victories before public victories are possible. Changing internally and reaching deeply within to find one’s true values and principles are necessary steps before it’s possible for an individual to impact external issues and relationships.

The Pygmalion Effect focuses on how perceptions are formed and how they are deeply entrenched within us. Covey and his wife realized that they were applying the Pygmalion Effect to a son who was struggling socially and academically.

The Character Ethic is the foundation for success and includes traits including - among others - integrity, humility, fidelity...

More summaries and resources for teaching or studying The 7 Habits of Highly Effective People.