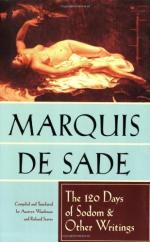 The 120 Days of Sodom and Other Writings Summary & Study Guide

Marquis de Sade
This Study Guide consists of approximately 41 pages of chapter summaries, quotes, character analysis, themes, and more - everything you need to sharpen your knowledge of The 120 Days of Sodom and Other Writings.

The 120 Days of Sodom and Other Writings Summary & Study Guide includes comprehensive information and analysis to help you understand the book. This study guide contains the following sections:

This detailed literature summary also contains Topics for Discussion and a Free Quiz on The 120 Days of Sodom and Other Writings by Marquis de Sade.

The collection opens with an essay by Simone de Beavoir that asks, "Must We Burn Sade?" which seeks to examine Sade's legacy and form a picture of his ethos based on apathy and atheism. This is followed by an essay by Pierre Klossowski who discusses Sade's notion of God and Nature as destructive forces and who disagrees with Simone de Beauvoir on some major points regarding Sade's atheism.

The second part includes two pieces by Sade from his collection entitled "Les Crimes de l'Amour," "Reflections on the Novel." and "Florville and Courval." "Reflections on the Novel" lays out Sade's idiosyncratic history of the novel, tracing its roots back to the Egyptians. He provides his assessment of several contemporary writers and their works, and then gives his own advice for writing good novels. "Florville and Courval" tells the complicated story of a woman who unknowingly and through no fault of her own, finds that she is married to her own father, has been raped by her son who she has had with her own brother, and has sent her own mother to the gallows. A contemporary review of the collection by a journalist named Villeterque is included in which this and other stories are soundly condemned. Sade's scathing response to Villeterque is also included.

Part Four includes two more pieces by Sade, the play "Oxtiern," and the short story on which it is based, "Ernestine." These two pieces, which have dramatically different endings, form an interesting comparison. They tell the story of a woman named Ernestine who is raped by the Count Oxtiern, who has removed her fiance from the picture by having him framed for theft. Ernestine plots her revenge on the Count, who despite his own evil schemes is finally brought to justice. The form of justice given out is different in each version however.

More summaries and resources for teaching or studying The 120 Days of Sodom and Other Writings.

The 120 Days of Sodom and Other Writings from BookRags. (c)2022 BookRags, Inc. All rights reserved.