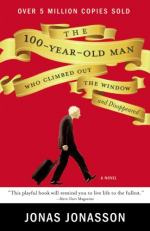 Related Topics
The Girl Who Saved the King of Sweden

Jonas Jonasson
This Study Guide consists of approximately 57 pages of chapter summaries, quotes, character analysis, themes, and more - everything you need to sharpen your knowledge of The 100-Year-Old Man Who Climbed Out the Window and Disappeared.

The 100-Year-Old Man Who Climbed Out the Window and Disappeared Summary & Study Guide includes comprehensive information and analysis to help you understand the book. This study guide contains the following sections:

This detailed literature summary also contains Quotes and a Free Quiz on The 100-Year-Old Man Who Climbed Out the Window and Disappeared by Jonas Jonasson.

The 100-Year-Old Man Who Climbed Out the Window and Disappeared is the examination of the epic life of Allan Karlsson, a Swedish man who travels the globe many times over during his eventful lifetime. Allan is a demolitions expert by trade, and his skills at exploding things and people brings him into contact with some of the most famous leaders of his lifetime. From Spain and General Franco, to American presidents such as Truman, Johnson and Nixon, to Soviet leader Stalin, and many, many others -- all of whom seek Allan's knowledge and abilities for their own governments' purposes -- Allan works at the behest of political causes and ruling classes far beyond his own personal, apolitical interests. His sought after desirability only magnifies when at the ripe age of 100 Allan steals a suitcase filled with millions, which leads to the latest and perhaps last adventure in his storied life.

100-year-old retiree Allan Karlsson vanished from an old folks' home on the day of his century-old birthday party, intent on starting a life anywhere but in an assisted living facility. He encountered Bolt, a young hoodlum, at a bus station and stole Bolt's suitcase containing 50 million Swedish dollars. Fleeing with the money, Allan soon met Julius Jonsson, a former thief, who offered shelter. Julius also helped defend Allan against Bolt's attack when Bolt attempted to reclaim the missing money. Bolt was accidentally killed in the process, and Allan and Julius disposed of Bolt's body and then disappeared with the cash.

Chief Inspector Aronsson arrived at the bus station, attempting to fathom what happened to the missing Allan. Meantime, Allan and Julius met Benny Ljungberg, a perennial student who became part of their "share the stolen money" group when he agreed to chauffeur them in his Mercedes and quit his hot dog stand business. The trio hid out on a remote Swedish farm occupied by the Beauty, aka Gunilla Bjorklund, and her elephant Sonya. Livid over his stolen money, the Boss, aka Per-Gunnar Gerdin, ordered his henchman Bucket to track down the missing suitcase. Bucket found the missing money at the Beauty's farm, but Sonya sat on him and crushed him to death before Bucket could collect it. Allan and his new friends decided to remain a loose-knit family and split the stolen money, planning to leave the Beauty's farm with a bus towing Sonya the elephant with them. The Boss became suspicious after not hearing from Bucket and set out for the farm to investigate. After a car accident with Allan's bus hitting the Boss' car, the Boss was taken back to the Beauty's farm for a secret recovery.

Meanwhile, during these numerous escapades, the story shifts back and forward in time. Allan's life is recollected in a series of encounters with famous world leaders. Allan's talent for explosive detonation played a factor in his secretive adventures, starting with General Francisco Franco in Spain in the late 1920s, when he saved Franco's life. Next, Allan sailed to America in the late 1930s, where in the 1940s he accidentally spilled an idea which lead to the first atomic bomb to physicist Alan J. Oppenheimer at the classified Manhattan Project. President Truman thanked Allan and assigned him in 1945 to assist Soong Mei-ling, wife of Chinese leader Chiang Kai-Shek, in her struggles to stop Mao Tse-tung's communist forces in China. Allan wound up rescuing Jiang Qing, Tse-tung's imprisoned wife, and crossed the Himalayas with her in a daring escape attempt. Allan crossed into Iran and was interrogated by a vice prime minister. Allan tricked the hostile interrogator by rigging an explosive which killed the vice prime minister and allowed Allan to flee to the Swedish embassy. Allan was thanked for his efforts by Winston Churchill, and then flown back home to Sweden. Next the Soviets recruited Allan, seeking out his bomb-making expertise in 1948. Allan upset Joseph Stalin in a dinner meeting and was assigned to a gulag for his offenses. He befriended Herbert Einstein, Albert's half-brother, in the gulag and the two escaped after 5 years in confinement. Allan and Herbert fled into North Korea in 1953 and met Kim Jong Il and his father Kim Il Sung, the head of state. Mao Tse-tung was visiting and immediately helped Allan and Herbert along their way as pay-back for Allan earlier rescuing his wife. Allan and Herbert fled to Bali, where Herbert wed Amanda, who later bribed her way into becoming the governor of Bali. In 1968, Amanda assigned Allan as an ambassador to France, where they both met French President De Gualle and visiting U.S. President Johnson. Johnson knew of Allan from Truman and assigned a secret agent status to Allan for him to recruit a top Russian nuclear scientist to act as double agent for the U.S.

Back in 2005, Allan and his band were joined by the Boss and Chief Inspector Aronsson, all of whom agreed to participate in an equal split of the money that united them all as co-conspirators. They lied to Prosecutor Ranelid to cover their tracks. Allan contacted Amanda in Bali and she approved the whole clan moving there to retire in comfort and style. Allan discovered Herman had passed years earlier. Allan and Amanda were married. Allan seemed set for actual retirement, once and for all, when an Indonesian official contacted him secretly and recruited him to help with building a nuclear bomb.

The 100-Year-Old-Man Who Climbed Out the Window and Disappeared is a robust, often satirical examination of the wide array of political beliefs permeating the 20th century. The book encompasses the same 100 years of time in both Allan's life and the same 100 years in time interweaving events of the previous century in order to compare and contrast the life of a singular human being. By doing so, the effects such a lone person can have on historical outcomes, versus the manner in which the world's pressures in and of themselves influence a person's own choices in reverse, are brought to comedic life.

More summaries and resources for teaching or studying The 100-Year-Old Man Who Climbed Out the Window and Disappeared.

The 100-Year-Old Man Who Climbed Out the Window and Disappeared from BookRags. (c)2022 BookRags, Inc. All rights reserved.