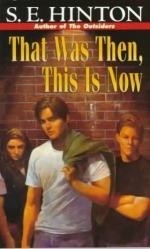 That Was Then, This Is Now Summary & Study Guide

That Was Then, This Is Now Summary & Study Guide Description

That Was Then, This Is Now Summary & Study Guide includes comprehensive information and analysis to help you understand the book. This study guide contains the following sections:

This detailed literature summary also contains Topics for Discussion on That Was Then, This Is Now by S. E. Hinton.

“That Was Then, This Is Now” is the second of five novels by S.E. Hinton. The main characters are Bryon Douglas and his best friend/adopted younger brother Mark. At the start of the novel, Bryon and Mark are doing their usual routine of hanging out and hustling at the local pool hall. Their lives are comprised of fun and fighting as they look for people to beat up while defending their friends from beatings. Neither one has thought twice about their actions before now. But, starting with their friend M&M’s disapproval of their actions, the novel chronicles the beginning and evolution of Bryon’s existential crisis.

Bryon and Mark’s mother is in the hospital at the beginning of the book. At the hospital, Bryon has another interaction that spurs self-questioning: he meets a boy who was badly beaten yet doesn’t blame his attackers. For Bryon, whose life has been one kneejerk reaction to violence after another, the idea of forgiveness confounds him. Mark, on the other hand, stays firmly entrenched in his belief of retribution and thinks the boy’s stance is stupid.

At the hospital Bryon also meets Cathy, M&M’s older sister who has just returned from private school. He is immediately attracted to her and appreciates that she isn’t interested in gang life.

Before too long, violence erupts again. It happens while Bryon is on his first date with Cathy. His ex-girlfriend Angela asked a boy to beat up Ponyboy Curtis and when Mark tries to stop the fight, he gets hit. Mark is sent to the hospital and later confesses to Bryon that having him there in the hospital made him realize how Bryon really is Mark’s only family.

As Mark recuperates, he tells Bryon he worries about the gang falling apart. Bryon agrees the gang isn’t as close as it once was, but Bryon sees this as a sign of growing up more than growing apart. When Mark goes back to his old antics and is arrested for stealing the school principal’s car, Bryon is livid that Mark gets off with a slap of the wrist, per usual for Mark.

Bryon’s questioning of his (and Mark’s) principles is put to the test when, in a tragic accident, Charlie is killed trying to protect the boys from men they hustled. Bryon is racked with guilt over his friend’s death, struck by the unfairness of it all. Mark, on the other hand, evades guilty feelings by emphasizing Charlie’s involvement in the matter more than theirs. The great divide between their perspectives pushes Bryon away from Mark and towards Cathy, as she understands Bryon’s perspective. For the first time in his life, Mark is jealous of one of Bryon’s girlfriends.

True to his form, however, Mark soon gets over his jealous feelings. He, Bryon, Cathy, and M&M go cruising. Tensions rise between Cathy and Mark as Cathy disapproves of Mark’s behavior and Mark disapproves of being analyzed by Cathy. Bryon feels caught in the middle. Mark leaves the group, very frustrated. To Cathy and Bryon’s surprise, M&M leaves the car too to join his other friends. Cathy and Bryon try to stop him, but he won’t return and goes missing for several weeks.

Some time later, Mark asks Bryon to go cruising with him, with the intention of finding Bryon’s ex-girlfriend Angela and getting even with her for having him beat up. Bryon reluctantly goes along with the idea. They cut off Angela’s hair after she passes out in their car and then leave her at her front yard. When they return home, Bryon still can’t fathom Charlie’s death or Mike’s beating and desperately asks Mark why these things happen. Mark points out to Bryon that it’s futile to ask “What if . . .”.

The next day Mark takes Bryon to the house where he knows M&M has been staying. He doesn’t say how he knows this, though. However, the day they arrive, M&M isn’t home. Bryon wonders how the people at this drug house know who Mark is. Later that evening, Bryon goes to pick Mark up at a friend’s house and while he’s waiting, Angela’s brothers drive past and spot Bryon. They beat him savagely in retaliation. When Bryon gains consciousness, Mark promises to avenge this beating, but Bryon begs Mark not to. He wants the endless cycle of fighting to stop. Like Mike, he also doesn’t feel animosity towards his attackers. This, along with his plea for nonviolence, infuriates Mark who wants to resort to violence to alleviate guilty feelings. Later, Bryon takes Cathy to the drug house to find her brother. They find him, but unfortunately not in time to stop him from having a nasty acid trip and needing hospitalization. The doctor tells his friends and family that he may never fully recover from this incident.

Already overwhelmed by how complicated his life has become, Bryon is further vexed when he finds a stash of drugs under Mark’s bed. He realizes that Mark has been getting all of his money from drug dealing. This is why he knows where M&M has been staying: he’s been selling drugs to the people in that house. Having seen the pain caused by drugs in Cathy’s family and tired of Mark always getting away with his antics, Bryon decides to call the cops on Mark.

Unfortunately, Bryon is soon overwhelmed with guilt after doing this. Not unlike Mark, Bryon decides to get even with someone to compensate for his guilty feelings. Unfortunately, that person is Cathy, whom he unfairly blames for Mark’s imprisonment. In trying to serve justice on his own terms, Bryon has lost two of the closest people in his life and is left confused and wishing for simpler days.