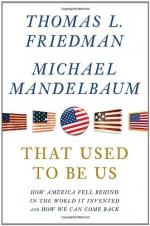 Plot Summary
+Chapters Summary and Analysis
Chapter 1: If You See Something, Say Something
Chapter 2: Ignoring Our Problems
Chapter 3: Ignoring Our History
Chapter 4: Up in the Air
Chapter 5: Help Wanted
Chapter 6: Homework x 2 = The American Dream
Chapter 7: Average Is Over
Chapter 8: This Is Our Due
Chapter 9: The War on Math (and the Future)
Chapter 10: The War of Physics and Other Good Things
Chapter 11: The Terrible Twos
Chapter 12: Whatever It Is, I'm Against It
Chapter 13: Devaluation
Chapter 14: They Just Didn't Get the Word
Chapters 15 and 16
Free Quiz
Characters
Objects/Places
Themes
Style
Quotes
Topics for Discussion
Order our That Used to Be Us: How America Fell Behind in the World It Invented and How We Can Come Back Study Guide

That Used to Be Us: How America Fell Behind in the World It Invented and How We Can Come Back Summary & Study Guide

Thomas Friedman
This Study Guide consists of approximately 33 pages of chapter summaries, quotes, character analysis, themes, and more - everything you need to sharpen your knowledge of That Used to Be Us.

That Used to Be Us: How America Fell Behind in the World It Invented and How We Can Come Back Summary & Study Guide Description

That Used to Be Us: How America Fell Behind in the World It Invented and How We Can Come Back Summary & Study Guide includes comprehensive information and analysis to help you understand the book. This study guide contains the following sections:

This detailed literature summary also contains Topics for Discussion and a Free Quiz on That Used to Be Us: How America Fell Behind in the World It Invented and How We Can Come Back by Thomas Friedman.

"That Used to Be Us," by Thomas L. Friedman and Michael Mandelbaum, subtitled, "How America Fell Behind in the World It Invented and How We Can Come Back," describes the current state of deterioration in which America finds itself. The authors first describe the current state of America. They explain what is wrong and what has been abandoned from what we used to be. They describe how America was the beacon for democracy and success and admired as the leader of the free world. Millions wanted to emigrate to America and share its dream.

For the last decade however, beginning in 2000, America has been in an obvious and steady decline, which was triggered by changes that occurred in the 1970s and 1980s. In 1979, President Nixon abandoned the gold standard and was the first to engage in deficit spending. He took these actions so the country could avoid a recession due to the exorbitant cost of the Vietnam War.

During the Reagan administration, drastic tax cuts were passed, mainly for the wealthy, and governmental regulations were eased to theoretically stimulate business. When Reagan saw the damage that the unpaid tax cuts were beginning to caused to the economy, he was appalled and tried to reverse their impact by passing a series of tax increases. The damaged economy persisted and both President H. W. Bush and President Bill Clinton were forced to increase taxes in order to increase revenues. By the time President Clinton left office, the deficit was turned into a surplus.

The entire economy began to implode however, after President George W. Bush took office. Under his administration, two large tax cuts for the wealthy were passed into law along with an unpaid for Medicare pharmaceutical program. At the same time, he waged and instigated paying for two wars. Deficit spending increased to the point that the country was forced to borrow from China and India in order to pay its bills. Bank deregulation and the decrease in congressional oversight allowed Wall Street titans, driven by avarice and lack of basic ethics, to herald in an decade of risky loans and illegal speculation. This in turn, caused a housing bubble that in 2008, almost destroyed the American economy and that of the entire world.

As a result of the reduction of revenue due to the unpaid for tax cuts, the government let our education system plummet in comparison to those in other industrialized countries. Infrastructure such as our bridges, roads, and public building have deteriorated. Also America has decreased her investment in research and development, placing the country at risk of losing our position of a superpower and the status that the country had earned of "exceptionalism."

The impact of all these missteps by our leaders was exacerbated and greatly accelerated by the merger of IT with globalization.

The American government has ceased to function due in part to the hyper-partisan nature of politics that exists in the US government. Other contributing factors that have paralyzed our political system is the influence of lobbyists and special interest groups who contribute millions for the reelection campaigns of our legislators. There is a segment of leaders who choose to ignore the warning signs that have been confirmed by the vast majority of experts and scientists that global warming will destroy our nation and our planet. Many of American elected representatives are refusing to learn from our history and deny the inevitability of a dismal future.

There is hope that America can reclaim its greatness and dream. Leaders have to return to the five pillars that have always been the formula for prosperity: 1) Public education must be provided for more and more Americans; 2) the national infrastructure must be continually maintained and modernized; 3) the doors to immigration must be kept open; 4) basic research and development must be funded by the government; and 5) private economic activity must have necessary regulations.

More summaries and resources for teaching or studying That Used to Be Us: How America Fell Behind in the World It Invented and How We Can Come Back.

That Used to Be Us: How America Fell Behind in the World It Invented and How We Can Come Back from BookRags. (c)2022 BookRags, Inc. All rights reserved.