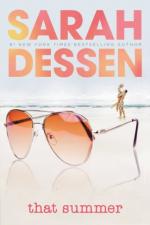 Sarah Dessen
This Study Guide consists of approximately 41 pages of chapter summaries, quotes, character analysis, themes, and more - everything you need to sharpen your knowledge of That Summer.

That Summer Summary & Study Guide includes comprehensive information and analysis to help you understand the book. This study guide contains the following sections:

This detailed literature summary also contains Topics for Discussion on That Summer by Sarah Dessen.

That Summer by Sarah Dessen portrays the struggles of a fifteen-year-old trying to accept the major changes in her life over which she has no control. With her parents' divorce, her father's second marriage and her sister's upcoming wedding, Haven feels she has no control over her life, so she dwells on memories of the summer that Ashley dated Sumner Lee and her family life seemed perfect. When Sumner Lee returns to Lakeview, Haven believes fate has sent him to remedy the past in some way, but she soon learns her memory does not mirror the actuality of the past. That Summer is a novel that explores the mindset of a teenage girl coming to terms with the past, accepting the present and looking forward to the future.

While attending Dad's second marriage to Lorna Queen, Haven dreads her sister Ashley's pending marriage to boring Lewis Warsher. She recalls the summer when Ashley dated Sumner Lee, their family went to Virginia Beach, and everything was perfect. Ashley cries at Dad's wedding because of the finality of the situation, but Haven never cries at weddings. While Ashley, Mom and Lydia stress over wedding plans, Haven laments her height, feeling gargantuan, and worries Mom will travel to Europe with Lydia after Ashley's wedding. Haven recalls how good things were when Ashley dated Sumner, and she recollects seeing Ashley dump Sumner on the front lawn after their Halloween party.

When Haven goes to dinner with Dad on Thursday night, she runs into Sumner who is working as a waiter, among other jobs, since he moved back to town a few weeks ago. She also sees him at the mall where she works at a children's shoe store and he is a security guard. Haven feels fate has sent Sumner back into her life to fix or alter the past somehow. After the final fitting for the bridesmaids' dresses, Mom informs Haven that she is considering selling the house since it is too big and expensive for just the two of them, and Haven suddenly dislikes all of the changes in her life which she has no control over. Haven encourages Sumner to visit Ashley, hoping he can bring back the sister she liked. She is distraught when she learns that Lorna is pregnant, so she turns to Sumner as proof that the time she looks back to actually happened.

Haven realizes how much she will miss Ashley once she is gone, and with wedding plans in an uproar the day before the wedding, Haven fights with a customer and gets fired. She is fed up with the changes in her life but feels she has finally grown into herself. When Ashley accuses her sister of being selfish for having a breakdown the day before her wedding, Haven runs off, but when she finds Sumner, he angers her by telling her that things are not how she remembers them when she blames Ashley for making him leave. Disappointed, Haven runs into the woods where Ashley finds her. When Haven asks about Sumner, Ashley explains she dumped him because she caught him cheating on her. He was the first boy to break Ashley's heart and the first boy to disappoint Haven. At Ashley's wedding, there is a lot that Haven wants to say to her sister, but when Ashley tells her that she loves her, Haven realizes some things do not need to be spoken between sisters. She finally acknowledges that the past does not matter and begins to look forward to the future where there is plenty of time to make new happy memories.

More summaries and resources for teaching or studying That Summer.

That Summer from BookRags. (c)2022 BookRags, Inc. All rights reserved.