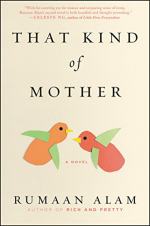 Related Topics
Leave the World Behind

That Kind of Mother Summary & Study Guide includes comprehensive information and analysis to help you understand the book. This study guide contains the following sections:

This detailed literature summary also contains Quotes and a Free Quiz on That Kind of Mother by Rumaan Alam.

The following version of this book was used to create the guide: Alam, Rumaan. That Kind of Mother. HarperCollins, 2018.

After Rebecca Stone gives birth to her first son, Jacob, she struggles with breastfeeding and adapting to motherhood. A black woman named Priscilla, who works at La Leche hospital where Rebecca gives birth, teaches Rebecca to breastfeed. Rebecca grows comfortable with Priscilla and relies on her for maternal guidance. Rebecca and her husband, Christopher, ask Priscilla to become their nanny. Priscilla is reluctant to forfeit her job at La Leche because her daughter, Cheryl, who works as a nurse there, struggled to secure the position for Priscilla. After Rebecca insists that Priscilla accept her offer, Priscilla quits her job at La Leche and cares for Jacob full-time. Rebecca grows to love Priscilla, and the two women develop a powerful friendship. Priscilla’s presence enables Rebecca to continue writing poetry, and her poem entitled Folly wins the Younger Poets Prize.

Priscilla informs Rebecca that she is pregnant but fails to reveal the identity of her baby’s father. When Priscilla dies in childbirth, Rebecca and Cheryl are uncertain how to manage Priscilla’s new baby, Andrew. Cheryl and her husband, Ian, are themselves expecting, so Rebecca offers to care for Andrew temporarily. After Cheryl gives birth to a baby girl named Ivy, Rebecca feels guilty adding Andrew to their chaotic lives. She, Cheryl, and Ian agree that Rebecca and Christopher will continuing caring for Andrew for six months, allowing Cheryl and Ian sufficient time to adjust to parenthood. The six months elapse, and Rebecca realizes that she has grown too attached to Andrew to part with him. Cheryl and Ian allow Rebecca and Christopher to adopt Andrew. Because Andrew’s father remains unknown, the adoption process is simple.

Rebecca feels indebted to Priscilla and thus accepts the challenge of raising two small children. Though she feels overwhelmed and temporarily neglects her writing, Rebecca refuses to hire a new nanny. Rebecca and Cheryl meet regularly while Andrew and Ivy play together. Rebecca considers Cheryl, Ian, and Ivy family, requesting that her sons call Cheryl their aunt. When Rebecca is invited to speak at Yale, she misses her hectic routine with Jacob and Andrew though she felt so excited to escape it. Christopher leaves his dream job at the British Embassy to work in a bank. Christopher’s friend suspects that the bank for which Christopher works is fraudulent, and Christopher fears for the safety of his job.

Cheryl, Ian, and Ivy celebrate Christmas with the Stones, and Cheryl and Rebecca discuss Andrew’s race and Cheryl’s role in the Stones’ home and family. Several months later, Christopher discovers that the insider trading and embezzlement he suspected at work did occur. He fears that his position at the bank will implicate him in its illegal activities. Christopher proves innocent and remains temporarily unemployed. One day, Ivy falls ill at daycare. Because Cheryl and Ian are both working, Cheryl asks Rebecca to retrieve Ivy and care for her until Ian returns home. The receptionist denies Rebecca access to Ivy because Rebecca is not listed on Ivy’s security card. Only after Rebecca insists that she and Cheryl are family, revealing information proving their relationship, does the daycare phone Cheryl to confirm Rebecca’s identity and release Ivy.

With Jacob and Andrew now both in school, Rebecca visits her father. She recalls how much effort he invested into fatherhood and appreciates his attentiveness. During Rebecca’s discussion with her father, she recognizes that her marriage with Christopher is failing, and she feels reluctant to revive it. At Easter, Rebecca tells Cheryl that she and Christopher are divorcing. Rebecca feels surprised when Cheryl admits that she and Ian battle with their own marital issues. Later, Rebecca and Christopher, though divorced, take Jacob and Andrew on a family vacation to New York city. While in New York, Rebecca meets with her editor, Alice Quinn, and they discuss Rebecca’s work, their childhoods, and Rebecca’s children. Rebecca feels annoyed that conversation of her poetry must always be interrupted by mention of her children. Rebecca and Christopher watch their sons play in water fountains during a particularly hot New York day, and Rebecca feels proud that she and Christopher still converse and coexist peacefully. Both boys have grown significantly, but still enjoy playing together. When Christopher knocks on Rebecca’s hotel-room door late at night, she expects him to seduce her. Instead, Christopher reveals that the National Transportation Safety Board where he now works has requested his assistance with a case. Christopher returns to work and Rebecca, Jacob, and Andrew drive home to Baltimore early.

During a family dinner, Cheryl and Ian tell Rebecca and Christopher about Ian’s recent altercation with the police. While driving home from his job at the car dealership in a new BMW, the police pulled Ian over and forced him to lay on the ground in his suit for ten minutes. Ian and Cheryl explain that they wish to tell Andrew and Jacob this story, preparing them for Andrew’s inevitable mistreatment as a black man. Rebecca tries to rationalize the police officers’ behavior, and Cheryl argues that Rebecca refuses to accept the truth.

During an afternoon at home alone, Rebecca learns of Princess Diana’s death and wonders whether her idealization of Diana was warranted. Rebecca writes two poems about the princess which receive great acclaim. Rebecca’s friend Karen, who also works at John Hopkins, admits her jealousy of Rebecca’s National Book Award nomination. Karen attempts to set Rebecca up with her friend, but Rebecca declines. Rebecca returns home to find Jacob and Andrew fighting, and Jacob argues that Andrew is not part of their family. Andrew’s teacher reveals that she has segregated Andrew from the class on occasion because she sometimes finds his presence disruptive. Rebecca returns home her disheartening parent-teacher meeting and cooks dinner with her two sons.

Rebecca’s family gathers to celebrate her Ruth Jameson Award. They discuss the inevitable death of Cheryl’s mother-in-law whom Cheryl refers to as the closest thing she has to a mother. Everyone contemplates the meaning of family. Shortly thereafter, Rebecca visits Cheryl so Andrew and Ivy can play together. Cheryl reveals that she always knew the identity of Andrew’s father and withheld that information to uncomplicate the adoption process. Cheryl argues that Rebecca has never regarded her or Priscilla as real people. A young student retrieves Rebecca when she travels to accept her Ruth Jameson Award. She contemplates his youth and her own age relevant to her writing career and children. In her acceptance speech, Rebecca communicates her belief in a future where her black son and white son are regarded as equals.

That Kind of Mother from BookRags. (c)2022 BookRags, Inc. All rights reserved.