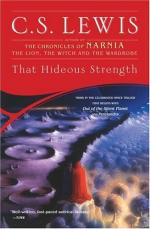 Plot Summary
+Chapters Summary and Analysis
Sale of College Property
Dinner with the Sub-Warden
Belbury and St. Anne's-on-the-Hill
The Liquidation of Anachronisms
Elasticity
Fog
The Pendragon
Moonlight at Belbury
The Saracen's Head
The Conquered City
Battle Begun
Wet and Windy Night
They Have Pulled Down Deep Heaven on Their Heads
Real Life is Meeting
The Descent of the Gods
Banquet at Belbury
Venus at St. Anne's
Free Quiz
Characters
Objects/Places
Themes
Style
Quotes
Topics for Discussion
Order our That Hideous Strength Study Guide

C. S. Lewis
This Study Guide consists of approximately 71 pages of chapter summaries, quotes, character analysis, themes, and more - everything you need to sharpen your knowledge of That Hideous Strength.

This detailed literature summary also contains Topics for Discussion and a Free Quiz on That Hideous Strength by C. S. Lewis.

The novel That Hideous Strength by C.S. Lewis carries on a plot that begins in the first book in this trilogy, Out of the Silent Planet, and continues through the second novel Perelandra. This story can, however, be read without first reading the other two books. This novel deals with the issue of science versus ethics, among others. It follows the main characters, Mr. and Mrs. Studdock, as they become supporters of opposites sides of this battle. Those individuals believing that the idea of ethics is of little importance in their scientific age are the intellectual elite, and this group includes one of our protagonists, Mr. Studdock. In contrast to this group, there are a small number of citizens who have gathered around one man, a kind of spiritual leader, to await instructions from celestial beings regarding how to stop the degradation of England's land and people. Among this group is Mrs. Studdock. The story told in this novel explores many other themes, and follows Mr. and Mrs. Studdock through separate personal transformations that lead to a complete transformation of their marriage relationship.

Jane and Mark Studdock are introduced to the reader as two people who misunderstand each other a great deal, yet their lives are forever intertwined by the vow of marriage. The minds and spirits of Jane and Mark Studdock could not be traveling in more opposite directions at the opening of this novel. Jane is housewife who feels pangs of loneliness and regret, and Mark is a man who is primarily concerned with belonging to groups that he holds in high esteem. The feelings of these two characters lay the foundation for some of the struggles that take place through the course of this novel.

Mark is first known to the reader as a fellow at a college in the town where he and his wife live, Bracton College. He is a member of a more exclusive group within the fellowship called the Progressive Element. When Mark is invited to join a group of researchers at an institute in another city called the National Institute of Co-ordinated Experiments (the N.I.C.E.), he happily accepts. Because of his feelings of inadequacy and his longing to belong, he is duped into thinking that the N.I.C.E. wants him to work for them because of his professional qualifications. He soon becomes frustrated because the specifications of his job are ever elusive. Mark does not discover this secret, but the reason for his lack of real work is that the individuals who run the N.I.C.E. are only using him to get to his wife. This is because the N.I.C.E. has found out that Jane has clairvoyant dreams, letting her see things in the present that need to remain confidential within the N.I.C.E. They fear that if she forms an alliance with an opposing group, she could be useful in the demise of the N.I.C.E.

Mark's time at the N.I.C.E. facility is marked by his admittance into a succession of groups that become more and more exclusive. His invitation to the N.I.C.E. is a kind of exclusive distinction from his fellows at Belbury college, and within the Progressive Element there. After spending some time in the N.I.C.E., Mark is invited to join a group of people who meet in the library to discuss the business at hand regarding N.I.C.E. public relations. This group, made up of six or seven other people, hands Mark the task of writing press releases that spin the news in order to aid the N.I.C.E.'s cause. Mark gradually comes to learn that the people within this group are manipulating and using him, and that when his utility is at its end, they will kill him. He tries to escape the grounds of the N.I.C.E., but by this time the Deputy Director of the organization has ordered him to remain there and send for his wife immediately. After his foiled escape attempt yet another group invites Mark into its order as the time draws near for the completion of the N.I.C.E.'s project. This group, even smaller than the last, is the one that explains to Mark the full scope of the plan being carried out by the N.I.C.E.

Mark learns, earlier in the story, from the group that meets in the library, that the N.I.C.E. is concerned with doing away with nature. They view organic matter as dirty and unnecessary, and they wish to get rid of as much of it as possible. They include in this scope both the outdoors, and the human body. They have devised a scientific way to keep a human head alive without its body. They name this the true resurrection, and they call for an end of the natural man. However, the innermost group to which Mark is invited explains that they have been in contact with beings that are far greater than humans, which they call macrobes. These macrobes are heading up a plan to get rid of most of the human race, as well as most of the human body. Each person will need only exist as a head, and only the chosen elite will survive. This is the plan that will prevail, if no one stops it.

Jane Studdock, while Mark has been gone visiting the N.I.C.E. facilities, has been plagued by vivid dreams that seem to have eerie connections to real life. What is actually happening, although Jane is slow to admit it, is that she receives visions of the present as it relates to the plan being carried out by the N.I.C.E. Through some friends in the town in which she lives, Mr. and Mrs. Dimble, Jane is invited into an inner circle of her own. The people in this group all live at a place called St. Anne's, and they all follow a man whom one might call their spiritual leader, though the group at St. Anne's is egalitarian by design. This leader, known by several names, is one of the few characters carried over from the first two books in this trilogy. His name is Dr. Ransom, and he has traveled to both Mars and Venus in other stories. He is in communication with heavenly beings which inhabit space and sometimes planets, and it is from these beings that he trusts to receive instructions on how to foil to N.I.C.E.'s plan.

Jane, because she is frightened by her vivid dreams, goes to live at St. Anne's and becomes one of the group working to end the reign of the N.I.C.E. It is her gift of vision that may finally help her group to gain the upper hand in this battle. Merlin, the character from the legend of King Arthur, has been sleeping in an underground chamber for centuries. Whichever group gets to him first will be able to use him to channel great power and fulfill its plan. Jane receives visions of Merlin's recent whereabouts and physical state. In the end, Merlin comes to St. Anne's of his own accord to help Dr. Ransom and the others break down the N.I.C.E.

Merlin is present when the heavenly beings, called eldila, descend into Ransom's room. These beings fill him with power, and he is then taken to the N.I.C.E. to infiltrate its ranks and corrupt its cause from the inside.

Merlin does just that. He disguises himself as a translator, and is welcomed in to help the people in the N.I.C.E. communicate with a man they think to be Merlin, but who is actually just a common beggar. Merlin causes a huge stir during a banquet in which many people are killed, and many of the prisoners of the N.I.C.E. escape. Mark, as well as others, finds his way to St. Anne's, but with a much-changed attitude about life.

Our story ends with the destruction of the N.I.C.E., and everyone who has been working to communicate with the evil celestial beings working toward the destruction of organic matter. Dr. Ransom awaits his ride into Deep Heaven as the members of the household at St. Anne's, human and animal alike, pair up with their mates. Love abounds at St. Anne's, and as the book closes, Mark and Jane, both much changed, are meeting each other for the first time since Mark left for the N.I.C.E., and they are very much in love with one another.

More summaries and resources for teaching or studying That Hideous Strength.