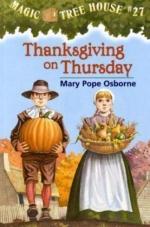 Janet Evanovich
This Study Guide consists of approximately 30 pages of chapter summaries, quotes, character analysis, themes, and more - everything you need to sharpen your knowledge of Thanksgiving.

This detailed literature summary also contains Topics for Discussion and a Free Quiz on Thanksgiving by Janet Evanovich.

Megan Murphy is having a makeshift picnic in a park in Williamsburg when she encounters a large, fluffy, friendly rabbit—eating at the hem of her skirt. Patrick Hunter approaches, tells her it's his rabbit and teasingly fusses at her for feeding her skirt to the rabbit. She later sees the same rabbit and takes it back to Patrick, planning to scold him for his lax pet parenting skills. But before she has the chance to tell him what she thinks, a young woman named Tilly Coogan rushes in, hands Megan her young son, says she'll return in a couple of weeks, and rushes out again. Patrick immediately searches for members of Tilly's family but finds she has none listed on Tim's patient information. Meanwhile, Megan has rocked Tim to sleep and discovered that she enjoys mothering the little boy. Patrick says he'll have to hand the child over to child services, but Megan objects. They eventually come to an agreement to have Megan watch the little boy during the day on weekdays when she doesn't work as a visitor's aide for tourists. Megan, who doesn't call herself an "artist", makes teapots for sale in shops around the Christmas season. When Patrick realizes that she has this commitment, he offers to find another sitter, but Megan has by that time become committed to the little boy. She soon falls into a routine with him and notes that she, Patrick, and their families don't seem to consider the possibility that Tilly may return for Tim.

Patrick is operating a fledgling pediatric office and is constantly worried about money. Though he and Megan are immediately attracted to each other, Patrick fears that he doesn't have enough money to support a family and that Megan will feel ignored because of the hours he'll have to devote to the practice for the first years. Megan first says that she doesn't plan to ever marry because of her bad experiences—two failed engagements. However, once Tim is returned to Tilly, Megan finds herself feeling desperate for a child of her own. She soon gets past that but does admit that she wants to marry Patrick—and that she wants it more the longer he puts off proposing. They are at a small bar—The Pit—when Megan proposes. Patrick declines, but before he can explain, they are joined by Dave—Megan's former fiancee who left her standing at the altar in front of some two hundred guests. Dave and Patrick are soon in a contest to determine which will marry Megan. They settle on darts with the agreement that the loser will be forced to marry Megan.

The budding love affair is further complicated by the fact that both Patrick's and Megan's families are visiting. The mothers are immediate friends and begin making suggestions for wedding plans. Both families seem to assume that Patrick and Megan will marry immediately.

More summaries and resources for teaching or studying Thanksgiving.