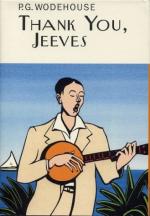 P. G. Wodehouse
This Study Guide consists of approximately 25 pages of chapter summaries, quotes, character analysis, themes, and more - everything you need to sharpen your knowledge of Thank You, Jeeves.

This detailed literature summary also contains Topics for Discussion and a Free Quiz on Thank You, Jeeves by P. G. Wodehouse.

Thank You, Jeeves is a novel by English writer P.S. Wodehouse. In this novel, Jeeves once again comes to the rescue of his employer, Bertram Wooster, as Bertram finds himself in the middle of a possible social disaster. Different in this novel, however, is the fact that Jeeves is no longer employed by Bertram Wooster because of his dislike of Bertram's new hobby of playing the banjolele. However, Jeeves goes to work for Bertram's good friend, Chuffy, making him assessable to Bertram as he struggles to help Chuffy marry the woman of his dreams, a young woman who was once Bertram's fiancé. Thank You, Jeeves is an amusing novel that that will please Wodehouse's loyal readers and new readers alike.

Bertram Wooster finds himself in the uncomfortable position of having to choose between his new hobby of playing the banjolele and losing his home and loyal employee or giving up the one hobby that gives him some measure of pleasure. Bertram chooses the banjolele, leaving Jeeves with no choice but to take a position with Bertram's school chum, Chuffy. At the same time, Bertram moves to a small cottage in the little town belonging to Chuffy in order to give himself the space he needs to continue his study of the banjolele. Upon his arrival, Bertram learns that his dreaded enemy, the psychiatrist Sir Roderick Glossop, is engaged to Chuffy's aunt, the Dowager Lady Chuffnell, and has brought to Chuffnell Regis with him Bertram's ex-fiancee, her brother, and father.

Bertram was engaged to Miss Pauline Stoker for only a short time before Sir Glossop ruined the relationship by telling Mr. Stoker rumors about Bertram's past. Now Bertram learns that Miss Stoker is in love with Chuffy and that he is in love with her. Bertram decides that he will help get the young couple together. Fist Bertram schemes to kiss Miss Stoker in front of Chuffy so that Chuffy will become jealous and propose. Unfortunately, Bertram mistakes Mr. Stoker for Chuffy and causes the elder gentleman to believe that Pauline is still in love with him. Mr. Stoker confines Pauline to his yacht, keeping her from Chuffy. At the same time, a fight between Dwight Stoker and the Dowager Lady Chuffnell's son, Seabury, causes a rift between Mr. Stoker and Sir Glossop. This rift ends the deal Stoker had planned to buy Chuffnell Hall, giving Chuffy the money he needs to provide for his new bride.

Bertram steps away from the situation, feeling Chuffy has it all in hand with his scheme to send Jeeves onto the yacht with a letter for Pauline. However, when Bertram returns from dinner he finds Pauline in his bed. Pauline has escaped the yacht and swam to Bertram's cottage, hoping to stay there until she can find some suitable clothes before going to see Chuffy. Bertram allows her to stay and goes out to the garage to sleep. Unfortunately, the overzealous law officers, believing that someone is attempting to break into Bertram's cottage, keep interrupting his sleep. Finally they bring Chuffy to him, believing he is ill for sleeping outside. Chuffy believes Bertram is drunk and takes him back to the cottage. While there, Pauline comes out of her hiding place, leading Chuffy to believe her morals are less than ideal.

After both Chuffy and Pauline have left, Bertram receives a visit from Mr. Stoker, who is attempting to find his daughter. Bertram assures him he has not seen her and sends him home. The following day, Bertram receives an invitation to Dwight Stoker's birthday party on the yacht. After dinner, Mr. Stoker locks Bertram in a room on the yacht, telling him that he wants him to marry his daughter since it appears they are having an affair. Bertram does not want to be married and jumps at Jeeves' scheme to get him off the yacht despite the necessity of using boot polish to darken his face. Bertram escapes the yacht and goes to his cottage, but finds his drunken valet there. Bertram has to escape the cottage, which the valet burns down by overturning a lamp.

Bertram goes to Chuffnell Hall for help, but cannot find any. Jeeves eventually comes to Bertram, but cannot supply the butter Bertram needs to clean his face because Seabury has used it all for a practical joke against Sir Glossop. Bertram is forced to spend the night in the summer house, but not before running into Sir Glossop who has also darkened his face and is desperate for a way to remove the makeup. Bertram sends Sir Glossop to his garage to use gasoline. The following morning, however, Bertram learns that Sir Glossop was arrested attempting to break in to the garage. Bertram must take his place in order to protect Sir Glossop's reputation and allow him to testify for his friend, Mr. Stoker, in an inheritance case. All turns out well, all rifts are mended, and Jeeves agrees to return to Bertram's employ.

More summaries and resources for teaching or studying Thank You, Jeeves.