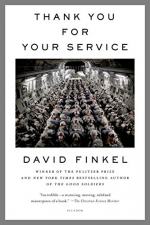 Thank You For Your Service Summary & Study Guide

David Finkel
This Study Guide consists of approximately 66 pages of chapter summaries, quotes, character analysis, themes, and more - everything you need to sharpen your knowledge of Thank You For Your Service.

Thank You For Your Service Summary & Study Guide Description

Thank You For Your Service Summary & Study Guide includes comprehensive information and analysis to help you understand the book. This study guide contains the following sections:

This detailed literature summary also contains Topics for Discussion on Thank You For Your Service by David Finkel.

The following version of the book was used to create this study guide: Finkel, David. Thank You for Your Service. Sarah Crichton Books, Oct. 1, 2003. Kindle.

In his book Thank You For Your Service, David Finkel follows the challenges that face soldiers and their families once they return home from overseas deployments. The author focuses on those suffering with post-traumatic stress disorder and traumatic brain injury, the invisible wounds of war. Finkel explores the pain of a widow dealing with the loss of her husband and the despair of families whose service members come home angry and violent. The book also shows how the military seeks to help hurting soldiers and their families as suicide rates of soldiers and veterans soar.

Finkel begins by introducing his reader to Adam, a soldier on his third deployment to Iraq. After several experiences in his deployment, including the death of his best friend, James Doster. Adam tells his higher-ranking officers that he is suffering combat stress. He is sent home on a special transport. At the airport, Adam meets Amanda Doster, James’ widow. She wants to know from him what happened to James, information that he cannot give her.

Along with Adam and his family’s story of his struggle with PTSD and TBI, Finkel writes about Nic DeNinno, Tausolo Aieti, and Michael Emory, other soldiers who were in the same unit with Adam. Each of these soldiers went to a different kind of treatment center for their issues, with much the same results. On top of having mental issues, Emory additionally suffered physical injuries from a gunshot wound to the head. Finkel describes how each of these different soldiers struggle with their individual demons that they have from their time in service.

In addition to detailing the lives of service members and their families, Finkel describes how the problems from which they suffer affect the people who try to take care of them. These people range from physical therapy aides and family advocates to the U.S. Army’s vice chief of staff. These people struggle to find some way to help the soldiers reincorporate themselves into their lives as civilians. The army officials try to find some way to reduce the number of lives being lost to suicide.

Finkel concludes his book with the portrait of Adam returning home from an extended therapy program in California. He is happy to be home and hopes that his contentment will last. There is the sense that Adam’s life will never be easy. He will continue to struggle with his disorders on a day to day basis, just like thousands of other veterans.

More summaries and resources for teaching or studying Thank You For Your Service.

Thank You For Your Service from BookRags. (c)2022 BookRags, Inc. All rights reserved.