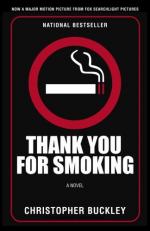 Christopher Buckley
This Study Guide consists of approximately 44 pages of chapter summaries, quotes, character analysis, themes, and more - everything you need to sharpen your knowledge of Thank You for Smoking.

Thank You for Smoking Summary & Study Guide includes comprehensive information and analysis to help you understand the book. This study guide contains the following sections:

This detailed literature summary also contains Topics for Discussion and a Free Quiz on Thank You for Smoking by Christopher Buckley.

Thank You for Smoking by Christopher Buckley is a farcical novel that travesties American government and the lobby system that thrives on it. It follows Nick Naylor, chief spokesperson for a powerful tobacco lobby, as he rises to media stardom resulting from a kidnapping attempt before becoming embroiled in a vast Washington conspiracy.

The story begins with Nick receiving an ultimatum from BR, his new boss at the Academy for Tobacco Studies, to develop a new means of promoting tobacco or lose his job. After discussing the matter with Bobby Jay and Polly - respectively the spokespeople for firearms and alcohol in a cohort they call the MOD Squad (Merchants of Death) - Nick comes up with the idea of reintroducing cigarettes into popular movies in a positive light. BR is unimpressed and intends to give Nick's job to his ambitious colleague, Jeannette.

He is saved at the last minute, though, by a successful appearance on Oprah that grabs the attention of the Captain, the elderly president of Agglomerated Tobacco. The Captain hires him back at double salary, and Nick finds himself in an auspicious position. He starts an affair with a young newspaper reporter, Heather Holloway, and gets a spot on Larry King. While on air, Nick receives an anonymous call threatening his life. Days later, he is abducted outside the Academy and plastered with nicotine patches, nearly killing him. Nick somehow survives the attack and finds that the media loves him, as does his boss. He does interview after interview, and his idea to put cigarettes in movies goes into effect. Nick, meanwhile, begins an affair with Jeanette. As all this is happening, he is receiving regular visits by two FBI agents who seem convinced that he kidnapped himself.

Nick heads to Los Angeles to pitch the cigarette placement idea to venal movie mogul Jeff Megall. Jeff is excited by the idea and the revenue it could bring in. Nick is called back to Washington DC to deal with a bill going through Congress requiring a skull and crossbones be stamped on cigarette packs. He gives stellar interviews on Nightline and at the Senate hearings, all but decimating their political rival, Senator Finisterre. Still, the bill passes, and FBI pressure on Nick is mounting. BR and the Captain tell him to retain legal counsel.

Eventually, Nick is arrested, the FBI having discovered a Virginia cabin rented in his name with boxes of nicotine patches in it marked with his fingerprints. He realizes that BR and Jeannette, lovers themselves, are trying to bounce him from the Academy. First they tried to kill him; that having failed, they're trying to get him arrested. Nick breaks the terms of his bail, going to Winston-Salem and imploring the Captain to help. The Captain agrees but dies the next day. Nick is fired by BR.

Gomez O'Neal, a former CIA spook and information man for the Academy, comes to Nick's aid. He provides information regarding BR's past murders of cigarette litigants and Nick's attempted murder. Nick, by now, is disillusioned by the tobacco industry and decides to plead guilty. First, though, and with the help of the MOD Squad, he kidnaps BR's hit man and convinces him that BR is behind it. The hit man murders BR and frames Jeannette. Nick married Polly and publishes a book about his experiences with the Academy called Thank You for Smoking.

More summaries and resources for teaching or studying Thank You for Smoking.

Thank You for Smoking from BookRags. (c)2022 BookRags, Inc. All rights reserved.