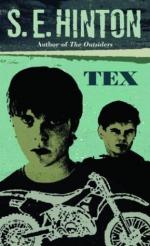 S. E. Hinton
This Study Guide consists of approximately 16 pages of chapter summaries, quotes, character analysis, themes, and more - everything you need to sharpen your knowledge of Tex.

Tex is the aimless, trouble-prone, and eponymous protagonist of the novel. He lives with his 17- year-old brother, Mason, who caters to their everyday needs in the absence of the brothers’ father and their deceased mother. The father has preferred going on a 5-month rodeo circuit tour over his natural responsibilities as a parent. He sometimes sends money, but he forgets to do so during the timeframe covered by the novel. Mason is an ultra-popular basketball player whose goal is to leave the small, poor town he grew up in and pursue a college education. Unfortunately, Mason has been thrust into his parental position by virtue of circumstances and his older age. Enjoying the simple things, 14-year-old Tex leads an easygoing, carefree and happy teenage life. He enjoys riding his horse Negritto and daydreams about his friend Johnny’s cute sister, Jamie. Throughout the novel, the two boys’ lives are turned upside down.

Against this situational backdrop, the novel opens with a description of a routine day for Tex. Heading home after school, he finds out that his brother has sold his favorite horse, Negritto, as well as his own, Red, to pay the gas bill and make ends meet. When Tex finds out, a fight ensues between the brothers, leaving a bruise above the protagonist’s right eye. Tex then darts off to look for the horses and runs into his friends, Jamie and Johnny Collins. As the Collins express their shock at the bruise and scar, Mason appears in the truck ordering his brother to get in.

Thwarted in the pursuit of his dreams, Mason is tired of the over-burdening responsibilities set on his young shoulders. Bob Collins, Mason’s friend, goes to see the brothers, and tells Mason Tex did not deserve the punch, but it should have been directed at their father. Bob then takes Tex and Johnny to the county fair. When the outing is over, the boys visit Charlie Collins, Johnny’s older brother, who is having a party. Johnny and Tex accidentally get drunk for the first time.

The following morning, the Collins’ father, Cole, finds all four passed out and sets the blame on Mason and Tex, who he believes are negatively influencing his children. Later that day, Mason’s drug-dealer friend Lem Peters pops up and announces he is a father for the first time. They sneak over to the Collins’ to share the news, where Jamie and Mason tell Lem he and his wife are not ready for parenting.

The novel comes to one of its climaxes when Mason discovers he has an ulcer. On waiting for test results from the city hospital, Mason and Tex decide to pay Lem and his small family a visit. There, they find out about his drug dealing. On their way back, tragedy strikes when they pick up a hitchhiker who aims a gun toward them and makes Tex drive to the State line. When a patrol car follows, Tex saves his and Mason’s life. Thanks to his presence of mind, he manages to drive the truck into a ditch. The hitchhiker eventually dies in a shootout with the cops.

The notoriety is seen by their father, Pop, on the news. He calls and tells them he’ll be coming home the following morning. Soon after he arrives, he gets into a fight with his eldest son. Pop also promises to get Negritto back for Tex, but it’s Mason who eventually ends up making the unsuccessful trip. Tex tells Mason he will hate him forever.

After attending a basketball game in which Mason is injured, Tex takes his romance to another level with Jamie in the truck after he punches a guy who insulted her. Tex wishes to push it a bit too far but Jamie refuses, leading to their breakup. Tex and Johnny are frequently getting into trouble, often fighting with each other. Both are suspended from school for gluing caps onto the letters of typewriters. Pop deals with the matter rather lightly, prompting Mason to reveal Pop is not Tex’s biological father.

Surprised, Tex runs out of the school and ends up coming across Lem, and subsequently he accompanies him on a drug-selling errand. He ends up in the hospital after he is shot by Lem’s customer and runs over the aggressor, amputating his arm. Tex calls Jamie and tells her where he is, and faints directly afterwards. When he regains consciousness, Mason tells him he beat up Lem, and Pop gives Tex details of his birth. Tex finds out that he was born as the result of an affair his mother had while Pop was in prison. Tex later grabs Jamie and kisses her when she briefs him of what happened when he was away. The novel ends happily with Tex sorting out his life and relationship with his brother. In the end, Mason is set to leave for college while Tex finds a job working with the horses he adores.

More summaries and resources for teaching or studying Tex.