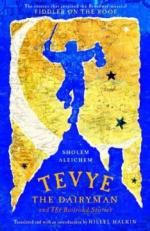 Tevye the Dairyman and the Railroad Stories Characters

Sholom Aleichem
This Study Guide consists of approximately 50 pages of chapter summaries, quotes, character analysis, themes, and more - everything you need to sharpen your knowledge of Tevye the Dairyman and the Railroad Stories.

Tevye the Dairyman and the Railroad Stories Summary & Study Guide includes comprehensive information and analysis to help you understand the book. This study guide contains the following sections:

This detailed literature summary also contains Topics for Discussion and a Free Quiz on Tevye the Dairyman and the Railroad Stories by Sholom Aleichem.

Tevyeappears in Tevye the Dairyman

Tevye is the philosophical dairyman who is ready to quote the Bible or some other Jewish text on every occasion. He is married to Golde and has 7 daughters. Tevye has so many dependents and a driving need to make money but fails when he tries investing in the stock market. Tevye is confronted with modern thinking and ways as he seeks to marry off his daughters. He is in a dilemma as most of his daughters refuse to accept arranged marriages. Tevye manages to raise himself from total poverty after he gets a large some for rescuing two Jewish women lost in the woods. However, Tevye's attempt to quickly become wealthy is stopped when he loses all his savings in financial speculation. Each time that Tevye has a daughter to marry off, the situation seems to get worse. Finally, Tevye is expelled from his village and forced to wander as an old man.

Goldeappears in Tevye the Dairyman

Golde is Tevye's wife and the mother of his children. Golde tends to be more tied to tradition than Tevye. She has to be reassured that her Grandma Tsaytl wants Tsaytl to marry Motl the tailor before she accepts the marriage. She is a typical Jewish housewife with a sharp tongue who is especially good at cooking dairy dishes such as blintzes. Golde's good cooking attracts young men to her house, along with her good-looking daughters, which cause her and Tevye lots of problems. Golde is rather nasty to Tevye without fear of the consequence. Tevye is quite forgiving of Golde's temper and at the time and in their income bracket, divorce is almost unknown. Golde is totally dedicated to raising her daughters and as they grow up, she loses her desire to live and dies.

Tsaytl is Tevye's eldest daughter. She falls in love with Motl Komsoyl the tailor and secretly agrees with Motl to marry. She cries bitterly when she hears that Tevye has arranged for her to marry Layzar Wolf. Tevye is not willing to force her into an unhappy marriage.

Hodlappears in Tevye the Dairyman, Hodl

Hodl is Tevye's second eldest daughter, who is intellectual and reads a lot. She is the star pupil of the tutor Peppercorn. They decide to marry. Hodl marries Peppercorn even though she knows he is going to jail and then to Siberia. She follows her husband in exile to Siberia.

Chavaappears in Tevye the Dairyman, Chava

Chava is Tevye's third daughter. She falls in love with Chvedka the scribe, who she compares with the Russian novelist Gorky. Chava decides to marry the non-Jew Chvedka, even though this means coming under the protection of the town Christian priest. Tevye decides there is nothing he can do to stop this, and declares that Chava is dead and mourns for her.

Shprintze is the daughter of Tevye who has the most unhappy fate of all. She falls in love with the rich young Jew Ahronchik who is totally dependent on his mother. When Ahronchik's family intervenes to break up the proposed marriage, Shprintze ends up committing suicide.

Beilkeappears in Tevye the Dairyman, Beilke

Beilke is Tevye's youngest daughter. She takes care of Tevye after the death of Golde. Beilke agrees to marry Podhotzur who is chosen for her by the matchmaker. Beilke has difficulty adjusting to the lies and pretenses of Podhotzur the contractor, who is wealthy. Later, Podhotzur goes broke and Beilke and her husband flee to America where they work in sweatshops.

Efrayim the Matchmakerappears in Tevye the Dairyman

Efrayim the Matchmaker approaches Tevye on several occasions, meeting him in Boiberik and on the train while traveling. Efrayim offers Tevye many matches for his daughters, but only Beilke accepts the match with Podhotzur the contractor. Efrayim is having trouble doing business because more people are arranging their own marriages.

Layzar is an older man who is a widower. He is wealthy and wants to marry Tsaytl, Tevye's daughter. He is a coarse man and literally approaches getting Tsaytl as his wife as if he were buying a cow. His proposal is rejected by Tsaytl who wants to marry Motl the tailor.

Ahronchik is a young man in his early 20s who does not work, and is supported by his wealthy widowed mother. Ahronchik becomes friends with Tevye and then meets and falls in love with Shprintze. They are to be married but Ahronchik and his mother go home and the engagement is broken.

Peppercornappears in Tevye the Dairyman, Hodl

Peppercorn is a young intellectual and student who is impoverished. He becomes friends with Tevye and tutors Tevye's daughters. Peppercorn gets Hodl to agree to marry him, though because of his revolutionary activity he is about to be sentenced to jail. Peppercorn marries Hodl and is then sent to jail. The couple reunite when Peppercorn is sent in exile to Siberia.

Podhotzurappears in Tevye the Dairyman, Beilke

Podhotzur is a rich contractor who makes money off of government contracts during Russia's war with Japan. He contracts with the matchmaker to marry Beilke. Podhotzur is embarrassed over the humble origins of Tevye and so he gives Tevye money and sends him off to Palestine. Later, Podhotzur goes broke and flees with his wife to America.

The Vending Womanappears in Competitors

The vending woman has her goods knocked down as she gets on the train. She complains about her male competitor ruining her business selling goods on the train. Later, she reveals that her competitor is her husband.

The Man from Kodnyappears in The Happiest Man in All Kodny

The man from Kodny is a poor Jew who desperately works to arrange for a Professor Doctor to see his sick son. He gets the Professor to visit his son, despite having little money to pay him.

Kivke is a Jew who is arrogant and is sentenced to run the gauntlet of flogging. He avoids this when Reb Nissl arranges for Kivke to be declared dead and smuggled to Austria. In Austria, Kivke sends letters to Reb Nissl and blackmails him every year or so for more money.

The Man from Pereshchepena seems to claim that 18 Jewish high school students go to school from his town. Actually, it turns out that he is referring to 18 boys who are sent to the Russian army.

The Man from Buenos Aires is wealthy, but has some big international business which is never defined. He is like the man of air, who makes money in a mysterious way out of nothing. This man is a romantic figure, who is returning to his home village to marry a hometown girl. The reader also asks whether he is actually some type of criminal or lunatic.

Berko, Berle the Vinegar Makerappears in The Miracle of Hoshanah Rabbah

Berko is a mechanical Jewish man who works with machinery making vinegar. He thinks that he knows how to run a locomotive and ends up on a runaway locomotive with a priest.

The Merchant from Heysen arranges to get a bribe to the prefect in order to get Cossack forces to stop people from out of town who are organizing a pogrom. He succeeds in protecting the local Jews, when by some miracle or scheme, the incoming train comes in as a locomotive without its cars attached.

Froyker is an orthodox Jew, but known for taking certain liberties and being a bit wild. He is raising funds for a charity for a burnt-down village. He wants Tashker to give money, so organizes a trick where Tashker bets that Mr. Kompanyevitch is not wearing a Tallis Koton.

The Card Playerappears in A Game of Sixty-Six

The Card Playing man is about 60-years old. He tells the commercial traveler stories about people playing Sixty-Six in order to suck the traveler into betting on the game. In reality, the Card Player is a card shark who plans to fleece his victim.

The Blondish Man is named Ahronchik Katz and is the father of an only son. His wife makes him fight to get his son into High School. Finally the man gets the boy into school, while ruining his business, but then the boy goes out on strike. The man wonders why he ever married.

The Fatherappears in The Automatic Exemption

The father has an only son named Itsik who has had to go before the army draft board four times. The father desperately goes from doctors to lawyers trying to get his son to avoid the draft.

The Husbandappears in It Doesn't Pay to be Good

The Husband is married with no children. He adopts his dead brother's son and takes in his wife's niece, but does not treat the girl the same. The husband becomes enraged at the girl when the boy, Paysi runs off with the girl Rayzl.

The Store Ownerappears in Burnt Out

The Store Owner claims to not know why his stores burnt down. Soon it becomes clear that he burnt down his store twice to collect the insurance money for the store and his goods. He protests that he will be cleared by any investigation.

The Thiefappears in Hard Luck

The Thief is a young man who first finds the Diamond Dealer's bag and is invited out to dinner by the Diamond Dealer. This same young man then proceeds to steal the bag. The thief later is in jail and explains that what does one good deed have to do with him working at his thieving profession.

The Fiduciaryappears in Fated for Misfortune

The Fiduciary keeps protesting about his good deeds to a widow and her children. Actually, he embezzles a large some of money from the dead father's funds and invests it in his business. He gives the widow and her family the minimum amount of money he can.

Moshe Nachman is a wealthy Jew from a small town. He is in Yehupetz without a residence permit to see doctors. He gets the poor brother-in-law Dovid to switch identities with him so Moshe is set free and Dovid remains in jail for not having a residence permit.

The Reluctant Jewappears in The Tenth Man

The reluctant Jew is a man who is clean-shaven and dressed like a Russian. He finally answers the nine Jews in Yiddish and tacitly consents to joining the Minyan. Later the mourning man jokes that the reluctant Jew can be a Jew, a non-Jew, and a pain in the neck.

The Commercial Travelerappears in The Railroad Stories

The Commercial Traveler is the narrator in all the Railroad Stories. He likes to talk on the train and ride in third class, usually crowded together with his fellow Jews.

Tevye the Dairyman and the Railroad Stories from BookRags. (c)2022 BookRags, Inc. All rights reserved.