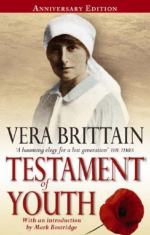 Testament of Youth: An Autobiographical Study of the Years 1900-1925 Summary & Study Guide

Vera Brittain
This Study Guide consists of approximately 24 pages of chapter summaries, quotes, character analysis, themes, and more - everything you need to sharpen your knowledge of Testament of Youth.

Testament of Youth: An Autobiographical Study of the Years 1900-1925 Summary & Study Guide Description

Testament of Youth: An Autobiographical Study of the Years 1900-1925 Summary & Study Guide includes comprehensive information and analysis to help you understand the book. This study guide contains the following sections:

This detailed literature summary also contains Topics for Discussion and a Free Quiz on Testament of Youth: An Autobiographical Study of the Years 1900-1925 by Vera Brittain.

Testament of Youth by Vera Brittain is Vera Brittain's own story. She grows up in the British town of Buxton where she lives an upper middle class existence. She always wants to attend college but her father does not believe it is necessary for women to be educated. His views change after a visit from a respected family friend and Vera begins to prepare herself for Oxford in spite of the comments from other women in the town.

Vera chooses to attend Somerville College and just as she begins, World War I breaks out. Her brother Edward and his friend Roland postpone their studies, enlisting in the war effort instead. Vera completes one year and then becomes a Red Cross nurse of V.A.D. This is the occupation she holds throughout the war, not matter how disagreeable she finds the task. She and her prep school friend Betty serve in London and Malta together. Vera also serves in France and is assigned to London when the war ends.

The war means that Vera loses the people who are closest to her. Her fiance is killed, their friends Victor and Geoffrey, and finally her brother Edward die as a result of the fighting. These deaths profoundly affect Vera whose life becomes divided into two different segments but she makes the necessary adjustments.

After the war she returnesto Somerville to complete her studies, switching from English to history. She becomes close friends with another student, Winifred. They become roommates and close friends after finishing at Somerville. Both are writers, teachers and tutors. They book lecture on the League of Nations and go on to work for the organization. They travel through Europe together both on private vacations and for their work with the League of Nations. On their first trip, Vera finds the graves of those she lost during the war.

In the post-war part of the book, Vera explores the issues and views of the post-war period. She is interested in woman's rights and works for that cause. She and Winifred succeed in achieving the kind of life they want as Vera begins to struggle with the idea of choosing between the lifestyle she has attained and marriage to the man she calls G. He convinces her that she does not have to choose, that she can have both.

This interesting books explains the lives of professional women in the World War I era. It looks at the problems they face and the kinds of choices they have to make, especially with the war. It is very interesting reading and well worth the reader's time.

More summaries and resources for teaching or studying Testament of Youth: An Autobiographical Study of the Years 1900-1925.

Testament of Youth: An Autobiographical Study of the Years 1900-1925 from BookRags. (c)2022 BookRags, Inc. All rights reserved.