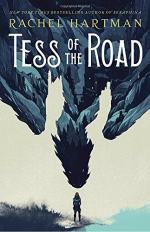 Tess of the Road Summary & Study Guide includes comprehensive information and analysis to help you understand the book. This study guide contains the following sections:

This detailed literature summary also contains Quotes and a Free Quiz on Tess of the Road by Rachel Hartman.

The following version of this book was used to make this study guide: Hartman, Rachel. Tess of the Road. Random House, 2018. Hardcover

A six-year old Tess seeks to understand how babies are made, but her mother dissuades her curiosity and stifles her imagination whenever possible. Eleven years later, Tess arranges a marriage between her sister Jeanne and Lord Richard. At their engagement party, Tess is offered a spot on an expedition to the Archipelagos with Countess Margarethe, but Tess drunkenly and angrily turns it down.

It is revealed that Tess is actually the oldest child, and was originally slated to marry Richard, but her family switched her and Jeanne after Tess slept with another man when she was younger. When Richard’s family finds out, they question Jeanne’s own purity, leaving Richard's brother, Jacomo, and Tess to watch the wedding night. Tess punches Jacomo and is sent to one of the queen’s summer homes with her sister, Seraphina, who is pregnant. Serpahina convinces Tess to run away from home, as her mother plans to send Tess to a convent.

Tess’ first stop is Trowebridge where she sleeps under a bridge. She wakes up next to a delusional man and accidentally kicks him out of fear before running. She sees her father and believes he has come to save her. However, when she overhears her father telling a nun that Tess must act up on purpose, Tess considers suicide. Instead, she pushes on and is reunited with her childhood friend, Pathka whom she frees from a work house. As the two run, Tess decides to join Pathka on his mission to find the mythical World Serpent, Anathuthia.

Along the way, Tess cuts her hair and takes the name Father Jacomo, using stories of her favorite adventure hero Dozerius to convince people on the road to help her. However, Pathka’s daughter, Kikiu, follows them and bites Pathka in an attempt to finish the rite of adulthood. She tells Tess that Pathka will die if they find the Serpent. Tess is moved by Pathka’s belief, however, and continues on.

It is revealed that Pathka told Tess a story about the serpent when they were younger. When Tess was 13 and forced to learn manners at court to prepare her for marriage, she joined her cousin Kenneth in attending lectures. There, Tess met Will for the first time and inspired him to debate about the existence of World Serpents with a dragon scholar, Spira. Tess came to believe that she could escape her life with Will’s help.

In the present, Pathka and Tess find a hunting lodge where Pathka hopes to find metals that he can use to replace the communication device he broke when Tess’ sister, Jeanne, tried to contact her. Two burglars, Reg and Rowan break in with the man from Trowebrdige whom Tess had kicked. He calls himself Griss, and it is revealed he suffers from Alzheimer's. Tess, who experienced the disease with her own grandmother Therese before having her child, stays with the men to help Griss. Eventually, the two escape and she takes him to a convent. Once there, she meets Mother Philomela who was originally meant to take Tess to the convent. However, she believes Tess’ parents were in the wrong and was inspired to go on her own pilgrimage. During this, Pathka is wounded by Reg while his daughter, Kikiu, shows up and bites Rowan. As Pathka recovers, Tess helps throughout the convent. She is unable to fix the relationship between Kikiu and Pathka, however, as Kikiu believes Pathka abandoned her, but Pathka thinks Kikiu can never understand his pain.

Once Pathka recovers, the two go to a cave known as Big Spooky where Pathka performs a ritual to speak with Anathuthia by cutting himself and leaving Tess to scatter the blood. When she finds scales of the serpent, both they and Pathka glow, healing Pathka. When he wakes up, he tells her that Anathuthia is leading him to her and they continue onward.

Once they rest, Tess tells Pathka of the day Will convinced her to steal Spira’s notes. After getting the dragon in trouble, for Will claimed that Spira assaulted Tess while Will himself had convinced her to sit in the dragon’s lair, they found that they actually stole Spira’s medicine. That night was also the first night Will touched Tess without her permission, but she convinced herself that it was alright because it was not sex. When she finishes the story, she wishes she could ask Spira’s forgiveness. However, Pathka believes she is trying to convince him to speak to Kikiu which angers him.

From here, the two continue into the country of Ninys which is recovering from the war with the dragons. Tess joins a road worker’s crew with the name Tes’poco - a nickname from her childhood that actually means stupid head- working to fill in a massive cavern. However, Pathka goes inside the hole, convinced that it was made by Anathuthia. Tess works for weeks as zpsyhks investigates and becomes significantly stronger. Tess meets Boss Gen who knows Tess is a woman but supports her and keeps her secret from the others. Later, Pathka tells Tess that he senses Anathuthia nearby.

Three months into their stay at the camp, a harlot named Dulsia arrives. Tess is initially horrified, as her mother taught her that all women in that profession were sinners. However, when she meets Dulsia, Tess learns that the woman chose to sell her body to save her brothers from going into the army. Dulsia is the first to tell Tess that her body is her own and she is allowed to seek pleasure from it just as a man. Their interactions eventually cause Tess to break down as she remembers her baby. It is revealed that she had the child, Dozerius, three months too early and the baby died in her arms. Tess never confronted her grief before now.

A few days later, Tess finds Pathka injured by another bite from Kikiu. She uses Pathka’s blood and Anathuthia’s scales to heal him. Later, as Tess is about to quit her job, the ground collapses beneath her feet. Instead of returning to the surface, she follows Pathka hoping that the workers will not search for her for long. The two follow the cavern and find Anathuthia’s nest.

Tess heads above ground where she finds a monastery and uses her fake name - Father Jacamo - to get inside. Once there, she meets Moldi and Lorenzi and asks about Anathuthia. She is locked in her room for this knowledge, but Lorenzi frees her and asks if she would help Moldi find his purpose, as the man has talent but seeks punishment. Together, Tess and Moldi find Anathuthia and both are overcome by a feeling Tess cannot describe; the creature is so vast that words cannot reach it. Tess believes she is nothing compared to it, freeing her from the comparatively minuscule guilt, pain, and sins of her past. However, Anathuthia’s movements destroys the monastery, and it shows itself to the other monks. Moldi decides to help the other monks come to terms with this new enlightenment. Tess learns that Pathka has someone merged with the serpent and wishes him goodbye before continuing on her own.

Along the way, she meets Father Erique and learns his is sexually abusing his servant, Angelica. Tess ties him up and frees Angelica, but the girl is furious, as she was stealing from the priest and wanted her own revenge. Tess realizes her anger is identical to the way she acted with the Countess months prior.

Tess arrives in Segosh and quickly finds work as an embroiderer with Gaida and caretaker to her son, Josquin. It is revealed that Josquin was a guide for Seraphina’s journey, but lost the use of his legs in an accident. He helps Tess prepare her notes on Anathuthia, as she believes everyone should experience the wonder she did. Tess gives a speech at the Academy under the name Tes’poco, to resounding applause. Over this time, Tess falls in love with Josquin and eventually sleeps with him once accepting that her body is her own.

Later, when Tess is at a gala for the Academy to become an honorary scholar, it is revealed she is actually a woman. Furthermore, Moldi only knew her male name, Jacamo, and she is thrown out. Months later, she finds Kikiu and Pathka, the latter gravely injured, and learns that the Academy violently murdered Anathuthia. Tess lets Pathka bite her, as that is what allows quigtul to overcome their anger and grief, and she falls ill herself. Days later, the two recover and Pathka says he wants to find another serpent so that Kikiu, who saw Anathuthia’s death, can gain the same enlightenment as him.

Later, Tess receives a letter from Seraphina whom she meets in Segosh. Seraphina reveals that her baby has been born, but they pretend it is Queen Glisselda’s, as the two are close friends. She asks if Tess would be willing to go on an expedition with Countess Margarethe to find other World Serpents. She is also going undercover for the Queen to see if the residents in the South are plotting against the Queen. Tess agrees, and Josquin encourages her to go even though she will be leaving him. At the port city, Tess runs into Jacomo and it is revealed that he has been following her for months. At first, he wanted to bring her back out of revenge. However, once he saw the good she was doing for the world and had time to think, he let go of his anger and realized he did not want to be a priest. He lets her speak to Jeanne, but the latter is furious when Tess does not want to come home and wishes for her death before hanging up. Tess then asks him to join her, Pathka, and Kikiu on the expedition. Maragarethe agrees, and the novel ends with Tess looking happily into the horizon.

Tess of the Road from BookRags. (c)2022 BookRags, Inc. All rights reserved.