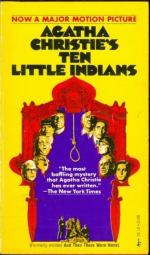 Conduct a mock trial for Justice Wargrave to determine whether or not he should be convicted of first-degree murder. If he is convicted, determine his sentence.

Research English culture and determine whether or not the characters would behave any differently if they were American instead of British.

Read another mystery story and compare the two works, focusing on how the mystery in each is constructed.

Investigate psychologists' conclusions on the nature of the criminal mind and compare those findings to the characterization of Justice Wargrave.