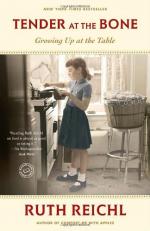 Tender at the Bone: Growing Up at the Table Summary & Study Guide

Ruth Reichl
This Study Guide consists of approximately 24 pages of chapter summaries, quotes, character analysis, themes, and more - everything you need to sharpen your knowledge of Tender at the Bone.

Tender at the Bone: Growing Up at the Table Summary & Study Guide Description

Tender at the Bone: Growing Up at the Table Summary & Study Guide includes comprehensive information and analysis to help you understand the book. This study guide contains the following sections:

This detailed literature summary also contains Topics for Discussion on Tender at the Bone: Growing Up at the Table by Ruth Reichl.

Tender at the Bone is the memoir of Ruth Reichl, food writer, restaurant critic and editor of Gourmet Magazine. Ruth's mother is possibly the worst cook in the world, and regularly served rotted food to unsuspecting guests. Mother is also bipolar, which makes her unpredictable, prone to tantrums and dramas. As a child, one of Ruth's earliest memories is standing in front of a tray of rotted food, protecting her favorite guests from eating it. This makes Ruth realize the importance of good food and how dangerous an appreciation for food can be. At the engagement party for Ruth's older half-brother Bob, Mother first charges the guests of honor an admission fee and then gives them and their friends food poisoning.

Ruth's father is inattentive because he is always preoccupied with Mother's domestic dramas, tantrums and chaos. As a result, Ruth seeks solace in the kitchen, with her foster grandmother Aunt Birdie and various cooks employed by the families. There, Ruth learns that most problems can be solved with a pan of brownies. When Ruth casually compliments her mother's command of the French language, she is shipped off to a boarding school in Canada, where the staff and other students do not know one word of French. After a traumatic year, Ruth makes friends and even finds a few fellow food-lovers.

Ruth's parents abandon her again in high school, when she lives alone in a house in Connecticut while they spend the week in New York City. Ruth copes by cooking huge meals for a crowd of friends who cut classes to hang out at her house. This pattern repeats itself in college and afterward in a commune. Despite her mother's disapproval, Ruth continues to cook after grad school, instead of getting a real job. She is accepted as a chef in a collectively owned restaurant in Berkeley, California during the early 1970s. There, Ruth uses food to cope with life's problems and distract herself from them.

The story comes full circle when Ruth's mother plans another big party, this time an 100th birthday celebration for Aunt Birdie. Ruth is able to separate herself from her mother's destructive behavior and plan a simple, elegant menu that does not poison any guests. Ruth's mother loudly proclaims that it is the best party she — Mother — has ever thrown. Determined to become a professional caterer, Ruth returns to California. Fate intervenes, however, when she is offered a job as a restaurant critic for a new magazine in San Francisco. Despite her mother's objections, Ruth embarks on a wonderful career as a food writer and editor.

More summaries and resources for teaching or studying Tender at the Bone: Growing Up at the Table.

Tender at the Bone: Growing Up at the Table from BookRags. (c)2022 BookRags, Inc. All rights reserved.