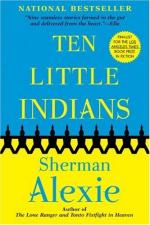 Plot Summary
+Chapters Summary and Analysis
"The Search Engine"
"Lawyer's League"
"Can I Get a Witness?"
"Do Not Go Gentle"
"Flight Patterns"
"The Life and Times of Estelle Walks Above"
"Do You Know Where I Am?"
"What You Pawn, I Will Redeem"
"What Ever Happened to Frank Snake Church?"
Free Quiz
Characters
Objects/Places
Themes
Style
Quotes
Topics for Discussion
Order our Ten Little Indians Study Guide

Sherman Alexie
This Study Guide consists of approximately 33 pages of chapter summaries, quotes, character analysis, themes, and more - everything you need to sharpen your knowledge of Ten Little Indians.

This detailed literature summary also contains Topics for Discussion and a Free Quiz on Ten Little Indians by Sherman Alexie.

This collection of nine short stories reveals multiple facets of life in contemporary America as experienced by Native Americans. Although there seems to be strongly autobiographical material in all of the stories, this material is presented through various lead characters who all appear to be different objectifications of the author, or literary masks, used to tell the stories. All stories are filled with humor and pathos. The conflict between indigenous Native American tribal culture and the mainstream white contemporary American culture runs through all the stories, giving them an extraordinary humanity as pain and heartbreak coexist with redemption and humor.

"The Search Engine" concerns a young and gifted Indian girl who as a student at Washington State University nurtures a dream of becoming a poet. She discovers a volume of poetry by a Native American named Harlan Atwater and decides to contact him. She eventually tracks him down in Seattle and realizes he is a rather ordinary person who let his dreams die.

"Lawyer's League" presents the existential dilemma of an ambitious young Native American who hopes to someday become president. However, his conflicts over his own racial identity and exactly how he should present himself in a majority white culture threaten not only his ambitions but also his sanity.

"Can I Get a Witness?" is a post-September 11 story that uses the device of a homegrown terrorist bombing to unmask two characters who lead empty lives. The main character is a nameless middle-aged Spokane Indian woman married to a man she doesn't love and who has two sons she can't abide. After a brief moment when it seems she may connect with the man who takes her to his apartment, she is once more alone and adrift in the world

"Do Not Go Gentle" is s touching, comic story that shows how adaptable Native Americans can be in using tribal custom for their survival in the modern, high-tech world. The setting is a children's hospital in Seattle, where two Indians perform an unusual, hilarious and ultimately effective healing ritual for their infant son.

"Flight Patterns" brings together two Americans of utterly different ethnic backgrounds but dark complexions - one a Native American businessman and the other a political refugee from Ethiopia who is a cab driver. They discover a bond that brings them close in a short period of time.

"The Life and Times of Estelle Walks Above" is a bittersweet story recollected by the narrator about his teenage years with his single, smart, politically progressive mother. The narrator curses his absent father, yearns for a positive male figure and thinks his mother is daffy, but he finally confesses his love for her and all that she does for him.

"Do You Know Where I Am" is a touching, humorous love story about a pair of Native American elitist college students who discover each other and are united over a stray cat.

"What You Pawn I Will Redeem" takes the reader deep into the heart of the grief, loss, absurdity and struggle of Native-Americans as an Indian tries to purchase from a white pawn broker in Seattle a set of "fancy dance" regalia stolen from his grandmother years earlier.

"What Ever Happened to Frank Snake Church?" tells the story of a Native American forest ranger who quits his job after the death of his father and makes basketball an obsession and a way to honor his dead parents.