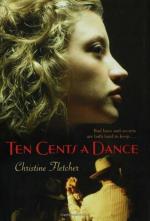 Christine Fletcher
This Study Guide consists of approximately 29 pages of chapter summaries, quotes, character analysis, themes, and more - everything you need to sharpen your knowledge of Ten Cents a Dance.

Ten Cents a Dance is a novel by writer Christine Fletcher. In this novel, Ruby Jacinski is a fifteen-year-old girl who recently quit school to take a job to support her family. Ruby's job does not pay enough to cover her family's living expenses, let alone their past rent and her mother's medical bills stemming from her rheumatoid arthritis. Therefore, when Ruby hears that she could make fifty dollars a week working as a dance instructor, she jumps at the opportunity. It turns out that instructor is a misnomer. Ruby quickly discovers if she treats the men coming to the taxi dance hall well, they not only will dance with her for a nickel a dance, but they will also tip her well and take her out on the town, often paying for restaurant meals and give her spending money. Ten Cents a Dance is a tale of a seedier side of life in the 1940s, illustrating the trouble that a young girl can get into even when her intentions are pure.

Ruby Jacinski is a fifteen-year-old girl who has lived something of a sheltered life until recently. Ruby's mother has struggled to raise her two girls properly despite the death of their father and the necessity of working in the packinghouse. However, Ruby's mother developed rheumatoid arthritis and was fired from her job. After selling off all they could, Ruby's mother finally admits to Ruby that it is time for Ruby as the eldest child, get a job. Ruby has been working in the packinghouse as well, stuffing pigs feet into jars filled with brine, a back-breaking job. For this reason, Ruby's mother lets her go to a local dance after much arguing and begging.

At the dance, Ruby gets into a fight with another girl over a boy. Ruby is kicked out of the hall without her jacket in the freezing rain. When Ruby tries to get back inside for her things, the club will not let her back in until local bad boy, Paulie Suelze, shows up and escorts her inside. When Paulie walks Ruby home, she feels like the luckiest girl in the world, especially when he kisses her. Paulie tells Ruby about a job that pays fifty dollars a week, more than three times her salary from the packinghouse, but accuses her of being too immature to try it. Ruby is desperate, however, and she decides to give it a try.

The job, a dance instructor at the Starlight Dance Academy, seems too good to be true when Ruby passes the interview process. Ruby tells her mother that she has gotten a job as a phone operator, but she has to work nights. The first night, Ruby wears a dress she has from a relatives wedding, only the dress proves to be too childish compared to the other girls' gowns. Ruby is told she must find a better gown before she comes back. This causes Ruby to be forced to turn to her friend, Angie, to beg Angie to steal a gown from her married sister. Angie makes Ruby promise to return the dress unharmed, but the first night she wears it Ruby goes to a restaurant with one of her coworkers and two customers only to spill a whole plate of food on the white dress.

Ruby asks her customer for the money to buy a new gown and he gives her twenty dollars. That same night, Paulie shows up unexpectedly at her window and gives her a navy blue gown she can wear at the Starlight. For this reason, Ruby decides to use the money that her customer gave her to pay her family's debt at the local grocery stores and redeem her mother's wedding ring from the pawn shop. Within a short period of time, Ruby has earned enough and gotten from her customer, enough money to get the rent paid up and significantly improve her family's diet.

As Ruby continues to work at the Starlight, flirting with and enticing customers to give her money, she also begins dating Paulie. Ruby manages to ignore the seedier side of her occupation for a time. However, when her mother begins to lie to Ruby and her sister, then becomes suddenly engaged and married to a new man, Ruby feels pushed out. At the same time, Ruby begins to realize that she is not the only Jacinski sister to lie about her relationships with men. When Paulie suggests that Ruby become a prostitute to earn money for them both, she suddenly realizes the precarious position she has placed herself and her family in.

Ruby neutralizes Paulie to protect her sister, despite her sister's insistence that she can care for herself. At the same time, Ruby's mother learns the truth about where all the money that saved their family comes from. Ashamed, but also realistic, Ruby decides that she and her family would be better off if she leaves. For this reason, Ruby goes to San Diego where she gets a job building ships for the military.

More summaries and resources for teaching or studying Ten Cents a Dance.