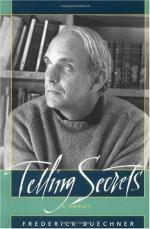 Frederick Buechner
This Study Guide consists of approximately 22 pages of chapter summaries, quotes, character analysis, themes, and more - everything you need to sharpen your knowledge of Telling Secrets.

This detailed literature summary also contains Topics for Discussion and a Free Quiz on Telling Secrets by Frederick Buechner.

Frederick Buechner, author, professor and ordained Episcopal minister, writes about his personal battle in overcoming the damage done by a lifetime of burying the past in "Telling Secrets." As a young boy in New Jersey, Frederick and his younger brother are faced with the suicide of their father. Buechner's father was an alcoholic and had a hard time holding down a job. Buechner's mother belittled and emasculated her husband as continuous battles waged between the couple. Their mother, apparently angry and feeling betrayed, does not hold either a funeral or a memorial service for her husband. She whisks her two sons, her mother and herself away to Bermudaj presumably to begin a new life and forget the past.

Although she does not vocalize that conversation about their father is taboo, the boys quickly sense that their questions or comments about their dead father are not welcomed. Mrs. Buechner is successful, at least superficially, in that the boys adhere to her silent demand and soon forget what their father even looked or sounded like—ultimately, in fact, it seems as though he never existed. The tragic episode was Buechner's first lesson in keeping secrets and self-deception—the damage from which stays with him for a lifetime.

Buechner's mother is able to maintain her self-delusion for the entirety of her life. She remains silent about the unpleasant. She is known to gold-plate everything—lampshades, statues, the past. In her later years when she had grown deaf, she would close her eyes when her grown sons came to visit her. She could no longer hear emotion that might come from their lips—with closed eyes she did not have to worry about seeing it either. At thirty-two, Buechner wrote a novel that paralleled the story of his father. After reading the book, his mother felt betrayed by her son and refused to ever again read anything he wrote.

As a married man with teenage children, Buechner is made to face the damage caused by his buried secrets as the legacy of denial and the resultant anger had been passed on to his offspring. His daughter's rage manifested itself in the form of anorexia nervosa. Although at one point she almost lost the battle, his daughter finally recovers. It is at this point that Buechner realizes he is also sick—not starving from lack of food; rather, he was starving emotionally from abandoning the truth.

Buechner wages his battle against the destructive past through therapy and a growing need to seek comfort in God. He strongly feels that the only way to recover from a past filled with secrets and deception is to find the "original person" that God had created him to be. Along the way to the freedom he seeks from the lies, Buechner becomes a prolific writer, authoring many novels and non-fiction works, and teacher as well as an ordained Episcopal minister. What proves to be the most helpful in his journey is joining a twelve-step program and working out his problems along with people suffering from similar problems. It is in this environment that he learns to "tell secrets."

In the end, Buechner feels blessed that, through his prayers, he is able to experience glimpses of the truth and that "original person." However, he learns that it is incumbent upon the individual to continually seek the Lord and His truth—to rejoice in silence and listen for his Word.

More summaries and resources for teaching or studying Telling Secrets.