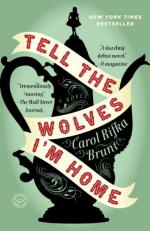 Carol Rifka Brunt
This Study Guide consists of approximately 80 pages of chapter summaries, quotes, character analysis, themes, and more - everything you need to sharpen your knowledge of Tell the Wolves I'm Home.

Tell The Wolves I'm Home: A Novel by Carol Rifka Brunt is a heartbreaking tale about a young girl named June who discovers that her favorite Uncle Finn, who is also her godfather, has AIDS and is going to die. Before he dies, Finn, who is a world renowned artist, paints a portrait of June and her sister Greta which she later learns he titled "Tell The Wolves I'm Home."

Finn dies feeling that the painting is unfinished. His partner had promised Finn that he would see to it that the painting was finished, and he does. June is devastated by Finn's death. In her own private misery, she doesn't recognize that she is not alone in the struggle to let Finn go. As a man who touched many hearts, Finn is missed terribly by her mother, her sister, his partner, and the world that mourns the loss of his contributions to the art world.

When June first meets Finn's partner Toby, she does so in secret, knowing that her family would not approve. In fact, June had been told that Toby was directly responsible for Finn's death. As June gets to know Toby, she learns that this is not the truth, but simply a concession Toby made in order to ensure Finn would still be able to see his nieces. Toby, also inflicted by this terrible disease, gets to know June after Finn's death. He had been hidden from her and Greta for the entire time as a punishment and condition that June's mother placed on Finn for being part of their lives. Her daughters were never to know Toby, to see Toby, or even hear of his existence. In this way, she has a focus for the anger that she feels against the disease that is taking her brother from her.

June is compelled to understand what her Uncle Finn saw in Toby. While she at first resents him simply because she has been programmed to do so, she soon understands that he was a large part of her Uncle's life. In fact, the more she learns about Toby, the better she understands. The drama unfolds slowly for June, who continues to slip out in secret to meet with Toby. Her sister Greta is slipping further and further into an abyss. Drinking herself into a regular stupor, she vents her anger at an Uncle who always seemed to favor June and at the world. Despite her Uncle Finn's death, June did not return to the inseparable bond they once shared. Greta's anger reveals itself in dozens of mean and insensitive barbs and behaviors, including several incidents in which she orchestrates June finding her in the woods. She is covered in leaves and too drunk to get home alone. Eventually, this family will reveal all, and June will find a way to bring Toby into their midst for his final hours, finding selflessness and love in herself and those around her.

More summaries and resources for teaching or studying Tell the Wolves I'm Home.