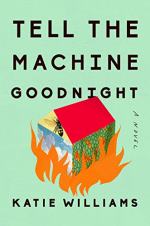 Katie Williams
This Study Guide consists of approximately 40 pages of chapter summaries, quotes, character analysis, themes, and more - everything you need to sharpen your knowledge of Tell the Machine Goodnight.

This detailed literature summary also contains Quotes and a Free Quiz on Tell the Machine Goodnight by Katie Williams.

The following version of this book was used to create the guide: Williams, Katie. Tell the Machine Goodnight. Riverhead Books, 2018.

The novel takes place in the future, year 2035, and the technological advances include a machine, Apricity, that is able to develop individual plans of happiness for human clients. The story is told in a series of first-person accounts from several characters: Pearl, Rhett, Carter, Elliot, and Val and, in third person, Calla. Pearl, one of the main characters, is a contentment technician for the Apricity Corporation. Her job is to swipe cells from the inside cheek of clients, place them into the machine, and read the results. The first results to which readers are privy uncover no ordinary machine. The client’s list includes eating tangerines as well as amputating the top portion of his right index finger. Such eccentric results are not uncommon, and Pearl is quick to recite statistical approval ratings from the Apricity Corporation’s manual to back up the strange request.

Pearl is a believer in the Apricity machine, even though her personal life is currently challenging. Her ex-husband, Elliot, left her for a younger woman several years prior, and her son, Rhett, is suffering from anorexia. She is in a state of constant worry and anxiety over Rhett’s condition, and he has been in and out of hospitals and clinics for over a year. When the point of view changes to Rhett, he divulges that denying his body the necessary sustenance to live is a source of power for him. He confides this to his former classmate Saff, a young woman who has only recently sought out Rhett’s help in her current situation. Saff explains that their class (now 11 students since Rhett has been in cyberschool for a year) created a game called Scapegoat. Each student took a turn being the receiver of others’ ridicule for a week. Saff, who was particularly hard on her classmates, was last. She was drugged and made to participate in a humiliating video. Rhett uses an Apricity machine to help him discover that Saff had done this to herself as punishment for how she had acted. Through their renewed interaction, the two fall in love.

Carter’s point of view exposes his brash and derogatory sense of humor as he interacts with his subordinates as the contentment technician manager in the Apricity Corporation. Through work, Carter meets Thomas, the manager in the Santa Clara office. Although Carter believes they are friends, Thomas ends up duping Carter with what he unveils as a new Apricity model. Instead of giving a contentment plan, it listed things that would give Carter power, like removing all but his chair from his office or randomizing lunch breaks. Carter gets lost in the power play, but is also demoted from his position before he realizes he has been betrayed. Pearl approaches Carter, now a technician like her, and asks for a prohibited file that only management at Apricity would have access. Carter gets it for her, a file that contains all the phrasing when an asterisk appears in an Apricity report. The Apricity machine takes any illegal or dangerous phrasing and changes it to an asterisk. Her interest is personal: after drugging Rhett one evening, she ran an Apricity test, and his result was an asterisk.

Elliot’s point of view recounts an art installation he has created. In the art piece, he takes random Apricity results and acts them out to a hyperbolic end; for example, for an Apricity result of eat honey, he eats spoonfuls of honey until he vomits. The art installation gains few reviews, though he is more upset at his current wife, Val, who is refusing to tell him a dark secret from her past. With Val’s point of view, readers learn the dark secret was her being charged with her mother’s death at the age of 11. She must now submit to monthly Apricity tests while on probation, a monitoring for asterisks. Whether or not she actually committed the act is unclear; however, Val, primed by her mentally unstable mother, takes on the guilt of the death as well as all the injurious things that happen around her. She is unable to divulge her secret to Elliot, and, noting Elliot’s lack of tenderness, she packs her bags and leaves.

Pearl’s new private client is Calla Pax, a famous horror movie film actress. While on site, Pearl finds that Calla’s new project is not a horror film, but that she is being subjected to a series of experiments where Calla’s greatest fears, like bugs crawling on her, are actually performed. Scientists are using technology to capture her fear in order to project it into others by way of movies and video games. Pearl, believing Calla’s health is at risk, tries to save her from the experiment, only to find that Calla wants to do the experiments simply because she is good at expressing fear. Even when fans believe pieces of Calla are now good luck charms and have tried to pull strands of her hair, she refuses to the leave the business, though her manager hires her a bodyguard.

Rhett is now at UC Davis in his first year of college, has broken up with Saff, but has met a new friend, and possible romantic interest in Zi, his college roommate. While away at college, Pearl, alone in the apartment, begins to have full conversations with her Apricity machine and takes it everywhere she goes. While on a first date with Mason, she takes out the Apricity machine, and it is stolen. Pearl has been targeted, as Mason is part of a competing company who wants to further the Apricity technology. He offers Pearl a job with his company, but she refuses. After Val left Elliot, Elliot rekindles his a romantic relationship with Pearl, but it does not last. Pearl admits to the stolen Apricity at work, and quits her job.

More summaries and resources for teaching or studying Tell the Machine Goodnight.