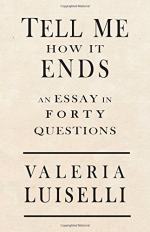 Related Topics
The Story of My Teeth
Lost Children Archive

Tell Me How It Ends: An Essay in 40 Questions Summary & Study Guide

Valeria Luiselli
This Study Guide consists of approximately 36 pages of chapter summaries, quotes, character analysis, themes, and more - everything you need to sharpen your knowledge of Tell Me How It Ends.

Tell Me How It Ends: An Essay in 40 Questions Summary & Study Guide Description

Tell Me How It Ends: An Essay in 40 Questions Summary & Study Guide includes comprehensive information and analysis to help you understand the book. This study guide contains the following sections:

This detailed literature summary also contains Topics for Discussion on Tell Me How It Ends: An Essay in 40 Questions by Valeria Luiselli.

The following version of this book was used for the creation of this study guide: Luiselli, Valeria. Tell Me How It Ends: An Essay in Forty Questions. Coffee House Press, 2017.

In this four-part essay, Valleria Luiselli explains the phenomenon of the 2014 “immigration crisis” in which thousands of undocumented children from Central America arrived at the southern border of the United States. From her position as an immigrant, mother, educator, writer, and translator she describes the process of screening children through an intake questionnaire. Interwoven through the list of questions are the author’s own experiences with issues of immigration, identity, and belonging.

The 40 questions referenced in the title of the essay refer to the intake questionnaire. The list of 40 questions were designed by nonprofit organizations in order to collect the experiences of immigrant children into a cohesive narrative for attorneys to reference in their defense. Luiselli reveals each successive question when describing particular cases on which she worked as a translator, uniting their experiences and illuminating a pattern of abuse and neglect. By asking various children the same 40 questions, Luiselli recognizes a larger underlying force that set the mass migration from Central America in motion.

The essay mimics the experience of immigrants entering the country by opening with the first intake question, “Why did you come to the United States?” (7). The reader is presented with the immediate interrogation immigrants receive upon crossing the U.S – Mexico border, thus positioning the reader as a trespasser. This brief interrogation frames a larger series of micro-aggressive suspicion in legal jargon surrounding immigrants. The first intake question continues to repeat throughout the essay, more than any other, because it touches on the contentious theme of national identity.

The vehicle of the intake questionnaire opens the text to more questions. As Luiselli continues to ask children questions from the questionnaire, she discovers connections to the United States government that prompt her to question the mainstream media’s presentation of the country’s role in the mass migration. The essay, therefore, provides a critical examination of media representation during the immigration crisis, and the effect of this representation on the government’s response.

Tell Me How It Ends frames the significance of immigrant child narratives in the title, as Luiselli's daughter frequently asks how the stories of these children end. By incorporating the words of a child verbatim into the title, Luiselli establishes her role as an intermediary agent. The author is an interpreter, not just for immigrant children, but for the audience as well. By presenting the experiences of children on their journey to the United States, statistics about the outcome of immigration court proceedings, and empirical evidence about the impact of U.S. intervention in foreign governments, Luiselli leaves readers to judge the cases of these children for themselves.

More summaries and resources for teaching or studying Tell Me How It Ends: An Essay in 40 Questions.

Tell Me How It Ends: An Essay in 40 Questions from BookRags. (c)2022 BookRags, Inc. All rights reserved.