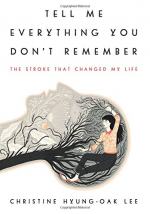 Tell Me Everything You Don't Remember: The Stroke That Changed My Life Summary & Study Guide

Christine Hyung-Oak Lee
This Study Guide consists of approximately 52 pages of chapter summaries, quotes, character analysis, themes, and more - everything you need to sharpen your knowledge of Tell Me Everything You Don't Remember.

Tell Me Everything You Don't Remember: The Stroke That Changed My Life Summary & Study Guide Description

Tell Me Everything You Don't Remember: The Stroke That Changed My Life Summary & Study Guide includes comprehensive information and analysis to help you understand the book. This study guide contains the following sections:

This detailed literature summary also contains Topics for Discussion on Tell Me Everything You Don't Remember: The Stroke That Changed My Life by Christine Hyung-Oak Lee.

The following version of the book was used to create this study guide:Lee, Christine Hyung-Oak; Tell me Everything you Don't Remember. Harper Collins, New York, NY, 2017. Kindle AZW file.

Christine Hyung-Oak Lee was 33 years of age when she suffered a stroke in the thalamus region of her brain. She was with her husband Adam and their good friend, a man she called Mr. Paddington, for the New Year holiday when the blood clot passed through a hole in her heart and caused the stroke. She complained of a headache, had vision problems, and could not communicate well, but she was outwardly fine and had a history of dibilitating migraines. By the time they returned home, Christine's brain was already beginning to heal, though the process would take months and she would never be the same. She decided to stay home from work the day after their return. She went to the grocery store but nothing even looked familiar other than a jar of spaghetti sauce. She managed to go home, apparently by intuition, but could not operate her phone or remember how to call for help. She instinctively called Adam, expressed her confusion, and he rushed home.

When they arrived at John Muir Medical Center, the doctors began to speculate about what could have caused her symptoms. Due to her age, a stroke was not at the top of that list. By the time they diagnosed it, discovered the cause, and began treatment, Christine was living in a perpetual state of forgetfulness. A week after the stroke, she was sent home where she struggled to cope with the overabundance of stimulation from normal things, including the movement of air and the motion of the car. Unable to express herself or to cope with her emotions, she raged and cried. Her care fell to Adam and he struggled to cope with that role, a struggle that became more difficult when his mother died. Christine was overly emotional during that time, unable to control her feelings and often unable to remember what was happening.

The question of whether she might have another stroke plagued her. Eventually, doctors repaired the hole in her heart. Christine was excited to discover that – for the first time in her life – she could exercise without being out of breath or physically ill. After getting in better shape and having a daughter, she fell into postpartum depression that culminated with Adam asking for a divorce. She later began a relationship with Mr. Paddington, and they fell in love.

Christine learned to accept that her life was forever changed and that being healed did not necessarily mean she was the same as she was before the stroke. While she said the stroke was not a good thing, it did provide a turning point in her life. Through all those struggles, she held to her desire to become a writer. Finally, she found the courage and skills to make that dream into a reality.

More summaries and resources for teaching or studying Tell Me Everything You Don't Remember: The Stroke That Changed My Life.

Tell Me Everything You Don't Remember: The Stroke That Changed My Life from BookRags. (c)2022 BookRags, Inc. All rights reserved.